Water Pipits (vannpiplerke) are very interesting birds in that they are the only European bird I can think of that migrates north in winter. They breed in the mountains of central Europe and winter by wetlands and sometimes coasts in lowland Europe (both north and south of the breeding grounds). They are also a very tricky species to identify and were until fairly recently treated as a subspecies of Rock Pipit (skjærpiplerke), indeed in the authoratitive Birds of the Western Palearctic (BWP) from 1988 it says, under Field Characters: “Rock and Water Pipit groups separable in adult breeding plumage but often not so at other times”. Water Pipit is a rarity in Norway with no more than a couple of records annually normally of birds associating with Rock Pipits on sandy beaches where they can find insects amongst piles of rotting seaweed. I have never seen Water Pipit in Norway and I must admit to being slightly sceptical to some records as I believe that the variability in litoralis Rock Pipit is greater than is generally accepted. The Rock Pipit I saw 7 November is a good example of a very pale Rock Pipit showing many characters of Water. Today was therefore a good opportunity for me to see Water Pipit side-by-side with litoralis Rock Pipit.

Two Water Pipits were reported on Sunday from Nevlungstranda, Mølen in Vestfold which at nearly two hours drive from home is right at the edge of my self-imposed limit for regular birding trips. Today I only managed to find a single bird with certainty amongst 12 Rock Pipits (20 were recorded on Saturday). When I first arrived around 0930 the sun had yet to rise over the horizon although the light was good. This meant that I could watch the pipits in a neutral light. I found the pipits quite easily feeding amongst the boulders and seaweed and the third bird I saw was clearly a Water Pipit. It’s underparts were very white and it stood out like a sore thumb.

After the sun rose it became a bit more difficult. The birds became wary plus the warm, low winter light made judging colours challenging. A Rock Pipit bird with the sun on it could suddenly appear to have very white underparts whereas the upperparts could have a warm brown tinge which is supposed to be one of the features of water pipit. However, with good views the Water Pipit could be picked out. 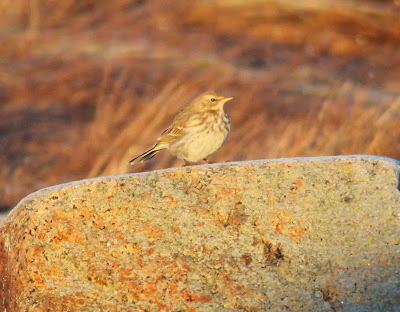 One of the Rock Pipits bore a yellow colouring ring EEL. This bird has been recorded at Mølen previously with the first record on 2.11.2011. The bird was ringed at Giske, Møre & Romsdal, Norway on 02.10.2011 and was seen at Mølen already on 02.11.2011. It spent the rest of the winter there and was back again for the winter on 30.10.2012. Colour ringed birds from the same location have also been seen in Sussex, England (my old stomping ground).

On the sea a single Long-tailed Duck (havelle) and two Shags (toppskarv) amongst commoner seabirds were good finds.
I had a walk around nearby Mølen where there were 100 Velvet Scoters (sjøorre) and a Red-necked Grebe (gråstrupedykker) were the highlights.
Driving towards Tønsberg I took the scenic route hoping to score some Hawkie as I needed a hit. And sure enough....... 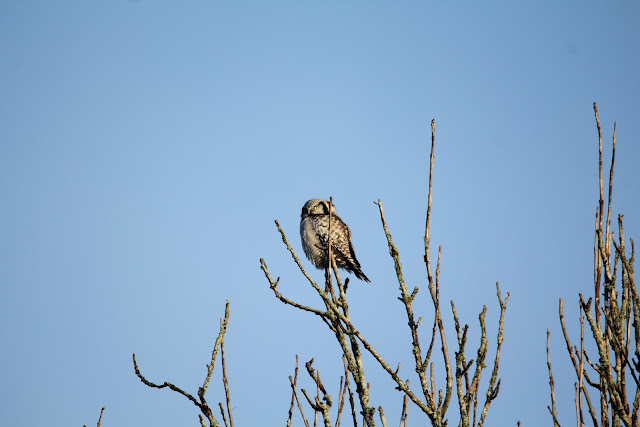 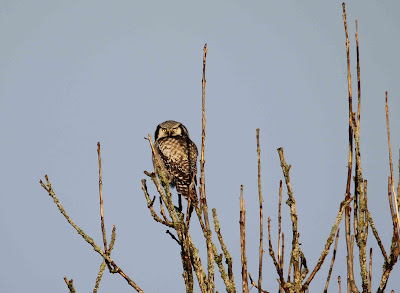 A Hawk Owl has been seen in this area in since 8th December but was last reported 22nd December.
In Tønsberg I visited Presterødkilen. Here the bay was entirely covered in ice despite it being barely zero degrees and the last few days not having been particularly cold. The reeds still held Water Rail (vannrikse) and Bearded Tits (skjeggmeis) although I only heard them calling. I had to go out to the open sea to find some ice free water although fog made visibility quite limited. At Jarlsø two Little Grebes (dvergdykker) were nice to get onto the year list.
Lagt inn av rixy kl. 21:31