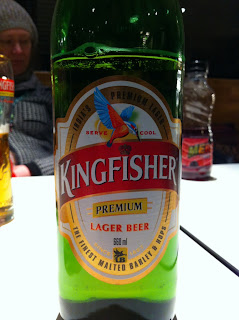 Today was my first outing of the year with Rune (4 days was a very long time to wait!). The ultimate target of the trip was the Kingfisher (isfugl) in Halden but there was a lot of birding to be done before we arrived there. First stop was a drive by of yesterdays Hawk Owl. Today it was sat on a combined lamppost and telegraph (electricity?) pole and as usual showed itself off in an exemplary manner. We were unable to find the second bird in the area but did have Great Grey Shrike (varsler) – the first of three during the day, so it looks like the Great Grey radar is up and running again.
Continuing into Østfold we stopped at Kurefjorden. Here we had one of the usual Rough-legged Buzzards (fjellvåk) on the Sletter islands along with an enormous Goshawk (hønsehauk) that was ripping up a prey item. Good numbers of Velvet (sjøorre) and Common Scoter (svartand) but no auks or divers. Kurefjorden itself was nearly completely frozen which was very surprising given that it was +3C and there has not been exceptionally cold weather recently. The waterfowl that were left were therefore concentrated in the mouth of the fjord. There was not too much to see with a single Slavonian Grebe (horndykker) alongside a handful of Great Crested Grebes (toppdykker) being the highlight. At Viersholm we had our second Shrike of the day.
Continuing towards Fredrikstad we had a Common Buzzard (musvåk) and our third Shrike of the day. In Fredrikstad we chanced upon the resident Carrion Crow (svartkråke) and easily saw the tame male Gadwall that has been present a few days and is clearly paired with a female Mallard (stokkand).


At Fuglenebb, Torsness we had good numbers of swans with 130+ Whooper (sangsvane) and 30+ Mute (knoppsvane) although we found no geese.

With it being close to 2pm and the sun clearly going down we rushed to Halden. We couldn’t find the Kingfisher at its usual site and tried the mouth of the river but again without luck. I started thinking that the only Kingfisher I would see this Friday evening would be the onbe pictured above but we returned to Porsnes and decided to wait in the belief that this is where it roosts. After about half an hour of looking it shot past us at in the gathering gloom at 1515 going up river at speed. We ran after it and briefly saw it perched before it called and then flew off. A couple of blurred pictures of something electric blue in colour are the only proof of our brief encounter.

So, all in all, a day with good birds and good company has to go down as a good start to 2013.


Oh, in case you had thought I was over my addiction then you are wrong – here are a couple of pictures of Hawkie. 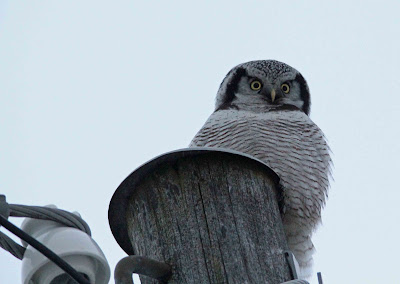