I had a plan

I made a plan for today before going to bed yesterday. I was going to get up at 4am and go for a walk in the forest east of Maridalen. I would hear owls whilst it was dark (sunrise 0630), then lekking Black Grouse at dawn and after that various drumming woodpeckers and Parrot Crossbill.
That was the plan at least. I started the execution well by getting up even earlier and parked the car in Maridalen at 0430. The moon was shining through thin, high cloud and with a surprising amount of snow still on the ground it was fairly light. An overnight frost had left a hard surface on the snow which also made it easy to walk on.
In my first hour of walking the only bird I had was my first Woodcock (rugde) of the year. I tried to convince myself I could hear a distant Tengmalm’s Owl (perleugle) but had to let it go. Around 0530 Blackbirds (svarttrost) started singing and were surprisingly numerous given how little bare ground there was. A couple of singing Redwings (rødvingetrost) were surprising as was my first Dunnock (jernspurv) of the year. Yellowhammer (gulspurv), Chaffinches (bokfink) and a Brambling (bjørkefink) completed the dawn chorus. Woodpeckers waited until the official sunrise time until they started drumming. There was not a lot of activity but I had two Three-toed Woodpeckers (tretåspett) drumming close to each other (probably a pair) plus a Black Woodpecker (svartspett). Unfortunately I saw none of them. I heard a single displaying Black Grouse but it sounded as though it was moving around rather than at a lek site. I have previously had a handful of displaying males here but it appears that the population of this species is in serious decline.


Walking down again at around 0800 I heard a crossbill and managed to attract them to me by playing the call of Pygmy Owl. A pair came in and started feeding in a pine (furu) tree and even mated in front of me at quite close range. A single male flew in calling and joined them and later on I had another 2 males. As I’ve said before crossbills have been very scarce around Oslo this year and it is Parrot Crossbills (furukorsnebb) that are most numerous. It would therefore make sense that these birds are Parrot Crossbills but I have struggled a bit with them! They are not the obvious huge billed Parrots but they have much larger bills than the Common Crossbills (grankorsnebb) I am used to seeing around Oslo and are "bull-necked". Now the taxonomic status of crossbills is far from clear with Common Crossbill possibly consisting of over 6 different species all with slightly different calls and bills as they have specialised on different types of cones and within this Parrot is just the extreme version so what exactly is a Parrot Crossbill anyway?


Crossbills are definitely not my strong side (and not many others judging by the differing opinions whenever a picture of a difficult bird is discussed) and I have very limited live experience with Parrots but I have believe these to be Parrots and have at least one other person concurring with this conclusion. Make up your own minds!
﻿
﻿


In Maridalen there was very little evidence of migration although I did have my first Oslo Linnet (tornirisk) and Meadow Pipit (heipiplerke) and a single Pink-footed Goose (kortnebbgås) was on the fields. Raptors have yet to make themselves known this year but yesterday on the bus back from the airport I had single of Rough-legged (fjellvåk) and Common Buzzard (musvåk). I was therefore looking out for raptors today and did actually find some: a migrating Goshawk (hønsehauk) and best of all a Merlin (dvergfalk) which was perched high on a spruce before it went Starling hunting.

I made it home for a late breakfast and then went with the family to Frognerpark where in addition to my first White Wagtail (linerle) of the year we had a couple of migrating Pink-footed Goose flocks (kortnebbgås) although I missed many more as other saw many thousands migrating today. 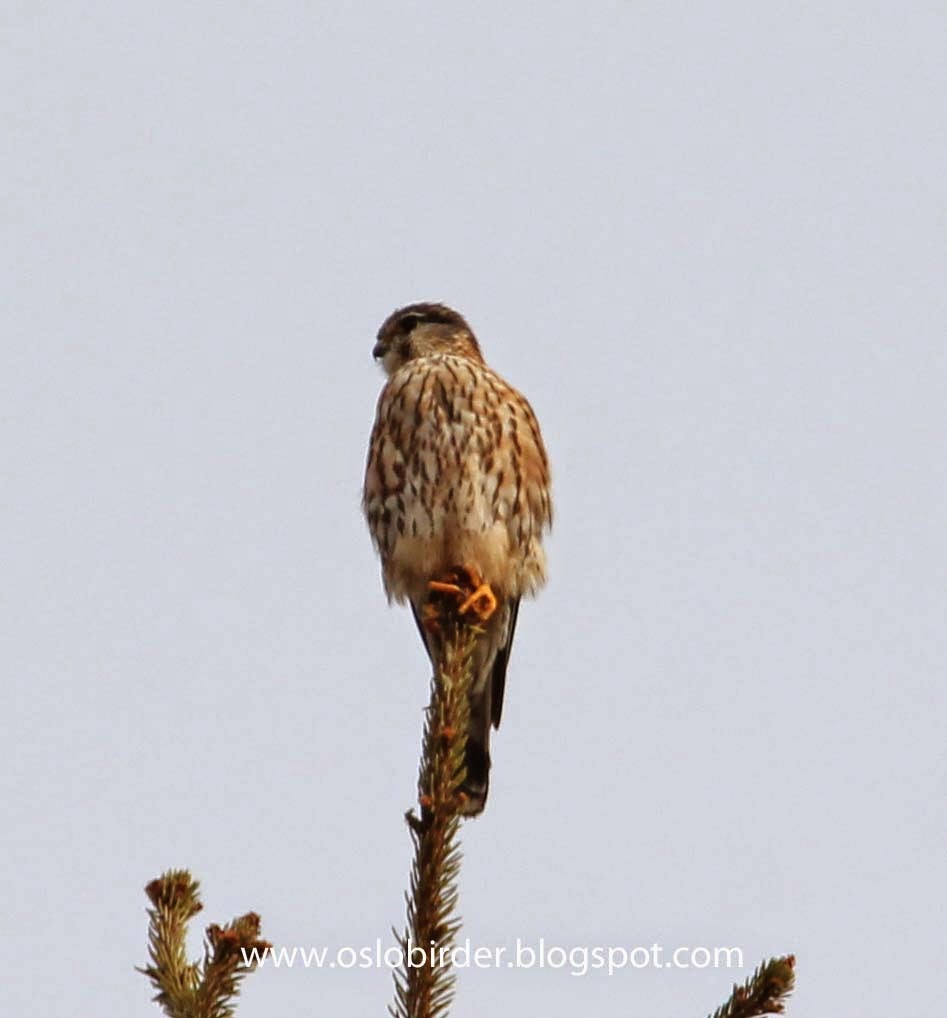