A Buff-bellied Pipit (myrpiplerke) of the eastern race japonicus was identified yesterday in southern Norway. The pictures on the net sparked a little debate as to which race it was (a bird of the American race rubescens was seen in western Norway a few weeks ago) and also as to whether it was “just” a Water Pipit (which it isn’t). Water Pipit (vannpiplerke) is in itself quite a rarity in Norway and pictures of a pale Rock Pipit (skjærpiplerke) from Horten in Vestfold had a couple of eminent birders suggesting that this bird was in fact a Water Pipit. (It wasn't that many years ago when these birds were all considered different subspecies of the same species - just see BWP)
I decided to check the bird in question out myself and went down this morning. The finder of the bird (who himself reported it as a Rock Pipit) and Per Kristian Slagsvold had already seen the bird and had the disappointing news that it was indeed a Rock Pipit. It took me a while to see the bird well and I could only concur with their identification. It was a pale bird, however the pictures I took of the bird show a much paler bird than I saw through the scope. The poor light here seems to cause a photographic effort with the pictures showing a much paler bird than was actually the case. My pictures are not particularly good but here are a couple of them. In reality the bird was olive grey on the back, the wingbars were buffy white and the lower belly was also buff. I did not get to see the outer tail feathers properly. Also the red brown legs are actually more a sign of Rock than Water Pipit? It is also worth noting that the bird sat up in trees after being flushed (not seen by me) which is apparantly more common in Water Pipit although this is maybe explained by lack of other areas for the bird to rest? 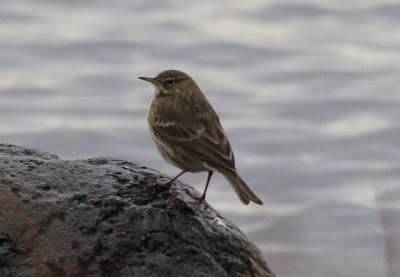 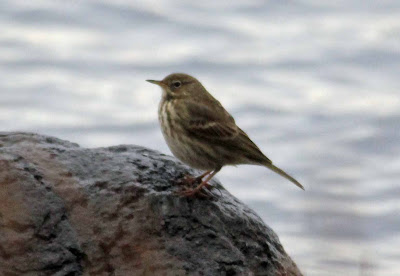 I spent yesterday looking for Hawk Owls and Grosbeaks again. Per Christian Moan casually mentioned yesterday that he had seen a couple around his house (between my house and Maridalen) but I failed to find these or a Hawk Owl seen on Sunday close to Oslo. Norwegian birders are I think I bit baffled by how keen I am on these two species but for an Englishman both are dream birds – exoctic species from northern climes that you could only drool over in bird books.
Lagt inn av rixy kl. 16:10