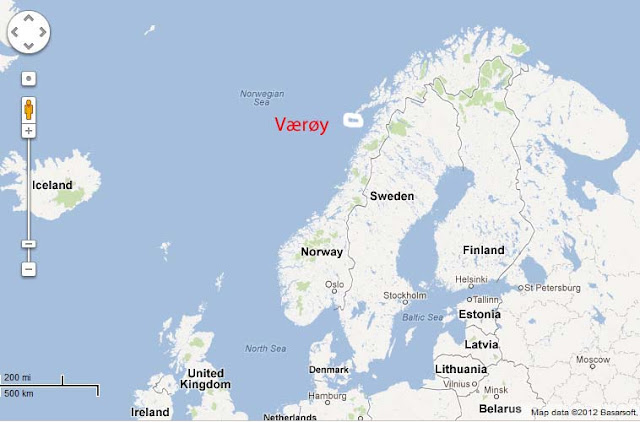 Westerly winds really aren’t that good out here and this morning there was no visible migration. I was offered an early lift to Nordland so decided to join the gang for their early morning round. On arrival though I found that given this was their last day they had decided to concentrate on Sørland so I drove back with them.
We went first to the Blyth’s Reed Warbler (busksanger) garden and this time I managed to see it although mostly brief fleeting views. My single picture where you can see a bird could perhaps be described as a diabolical documentation picture (or maybe not).

We then headed for the Plantation but it was equally quite here. Just a couple of Chiffchaffs (gransanger), my first Dunnock (jernspurv) of the trip with three (perhaps an indication of new arrivals) and a single calling Yellow-browed Warbler (gulbrynsanger). A message that there had been a Pallas’s Grasshopper Warbler (starsanger) trapped and ringed on adjacent island Røst gave us some hope and we split up again as we headed towards Sørland. A couple of the guys went with the car to fill up petrol and Kjell went walking in the adjacent field which has a lot of high grass. A cryptic warbler that he kicked up twice had him thinking PGTips and we all assembled to secure better views. The bird flew up in front of us a couple of times before showing well enough to confirm, rather unfortunately, that it was in fact a Sedge Warbler. Nevermind, we all (and Especially Kjell) had a little adrenalin kick.
I said farewell to the others as they headed back to Nordland to pack and clean up in their rented house and made a round of Sørland. The wind was now getting stronger and their was constant drizzle so I was not full of hope. Single calling Chiffchaff and Yellow-browed Warbler plus 20 odd Ring Ouzels (ringtrost) were the best I had before I headed to the harbour where a fishing boat had attracted around 500 large gulls. The vast majority were adult Herring Gulls (gråmpke) with a scattering of younger age classes, 60 odd Great Black-backed Gulls (svartbak) and best of all a Glaucous Gull (polarmåke). It was a juvenile/1st winter and as such is a quite early bird. It also looked like it had some oil on it’s breast feathers.


Whilst here a pipit flew over and called once sounding very much like the Olive-backed (sibirpiplerke) I had yesterday but it disappeared into the distance without calling again.
I now have the island to myself for the next two days. Obviously my chance of being the finder of a rarity increases as I have no competition but it is quite daunting as the island is large. If the easterly winds that are forecast for Tuesday bring in an arrival of birds then I think I will have to concentrate on Sørland. The map below shows the island. 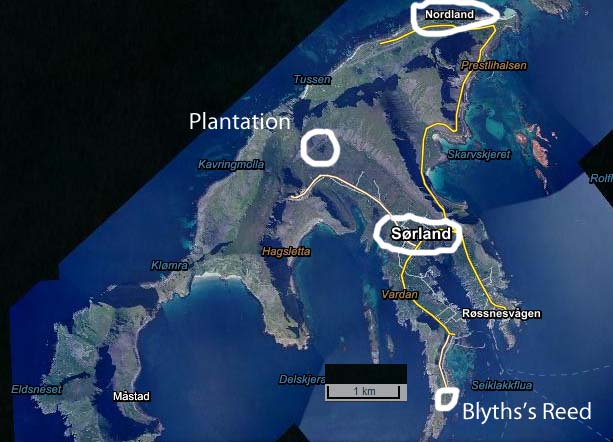 I was only in the field for 8 hours today with tired legs, rain and the offer of a Sunday roast tempting me indoors at 3pm. I need to keep my energy levels up for the next two days.
Lagt inn av rixy kl. 17:32