My run of relative bad form on the seawatching front continued today with Krokstrand and Hulvik only offering up a Fulmar (havhest) and three Arctic Terns (rødnebbterne) plus a few hundred Guillemots (further north around Oslo there were sightings of Long-tailed Skuas (fjelljo) and Grey Phalarope (polarsvømmesnipe)). Highlights were provided by three sightings of Peregrine (vandrefalk) which probably was accounted for by two different birds. One bird chased a couple of Guillemots low over the water at least a kilometer from land. It caused the auks to crash land ignominiously but did not secure brunch. Another bird flew side by side with a Raven (ravn) for a couple of minutes and seemed to be engaged in some sort of play fighting with mini swoops at the corvid.

On the way home some drama came in the form of a Guillemot flying into an electricity cable over the motorway and tumbling down to earth. It looked like it had taken off from the nearby Årungen lake and was just not able to gain enough height.

I managed no bird pictures of any note today so took a picture of this naval vessel instead, one of a flotilla that went by during the morning. 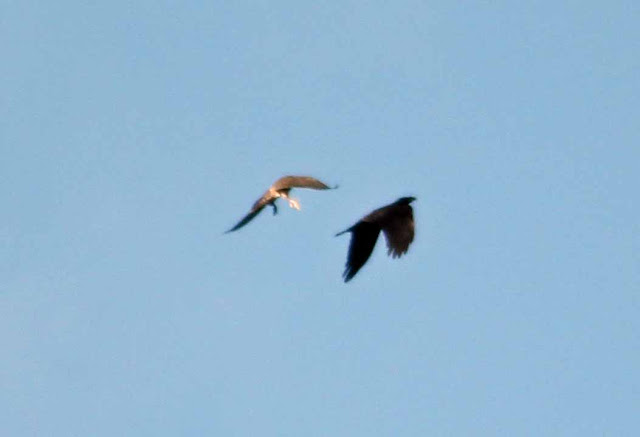