Night time temperatures have been down to zero recently and that seems to have spelled the end for mosquitoes such that a morning walk out to Årnestangen was a pleasant experience without any annoying buzzing noises and no need to apply a litre of DEET.
The water level is falling again but either the waders haven’t noticed it or the two juvenile Peregrines (vandrefalk) resting on the mud banks act as a deterent. At one stage a flock of 15 Bar-tailed Godwits (lappspove) came in and attempted to land which prompted both Peregrines to go on the attack. They did not succeed in securing dinner but split up the godwit flock and caused them to gain height rapidly. There were 30 odd Dunlin (myrsnipe) that were brave (or stupid enough) to use the mud banks but they tended to stay as far away from the falcons as possible. Raptors were the highlight of the day with an additional, adult, Peregrine, three Marsh Harriers (sivhauk) (adult male and female and juvenile), Kestrel (tårnfalk), Buzzard (musvåk), Osprey (fiskeørn) and three Sparrowhawks (spurvehauk).
Duck numbers are building up with good numbers of Wigeon (brunnakke), Teal (krikkand) and Pochard (taffeland) and a Slavonian Grebe (horndykker) was a surprise.
A latish Red-backed Shrike (tornskate) was perched on its favoured bush on the walk up and on the return and a male Lesser-spotted Woodpecker refused to allow itself to be photographed.

On the way home Maridalsvannet still held 15 Guillemots (lomvi) and a distant, high flock of geese heading south may well have been the first Pink-footed Geese of the autumn. 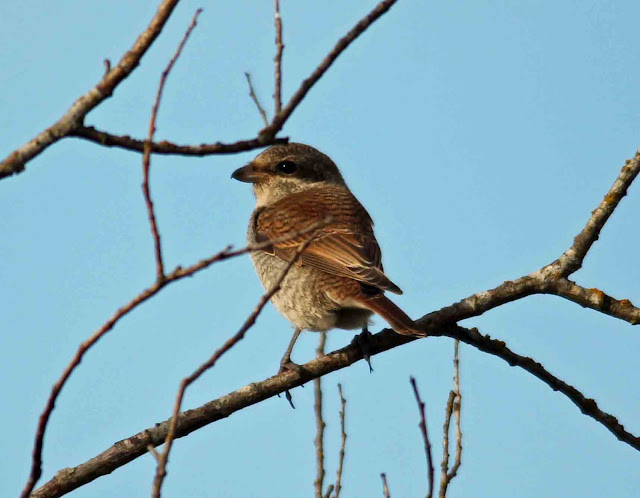