After all the waiting I finally arrived on Værøy at 5pm. I took the helicopter this time rather than the long and choppy ferry ride. Quite how it is permitted from a health and safety perspective I do not know but the helicopter carried 15 people. I was the last one and could not see that there were any remaining seats but then I realised that the 5cm wide gap between two people of stature was actually a free seat. Everyone sucked in and with a bit of wriggling I was able to sit down. Getting the seat belt on though was a whole other matter....
I could not get hold of the other birders on the island (they were on the north side where reception is bad) so once I had said my hellos to the family and dumped my baggage I was driven out to the “plantation”. I took just bins and the old lightweight 300mm lens. This is the largest area of cover on the island and a natural place to start looking. As I arrived I immediately heard a calling Yellow-browed Warbler (gulbrynsanger). BLISS! It took a long time to see one though and after three or four Chiffchaffs (gransanger) and a Goldcrest (fuglekonge) I eventually saw a Yellow-browed and then there were three! They were flitting around high in the trees and were quiet and amazingly difficult to keep track of let alone photograph.
I then received a text from Kjell telling me they had seen the Red-flanked Bluetail (blåstjert) in the plantation today plus a Hawk Owl (haukugle). The Bluetail fell after about 15 minutes searching and was always in the upper half of trees whereas I had expected it to be low down. It was a beautiful bird and even allowed itself to be captured on film. 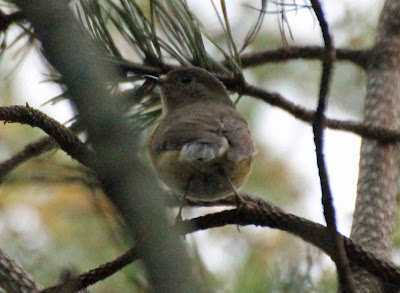 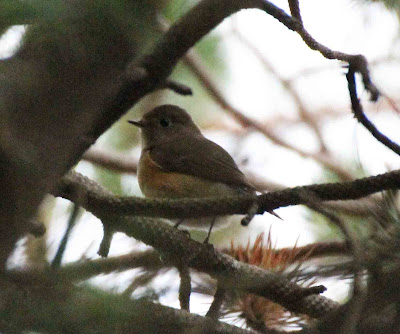 For such a small area of trees it was amazing how hard it was to find birds.

Alarm calling Chaffinches (bokfink) raised my suspicion regarding the Hawk Owl and as I approached them I could see three agitated Chaffinches and then another bird took off from right above my head. It landed only metres away and gave me breath taking views. This is what it looked like: 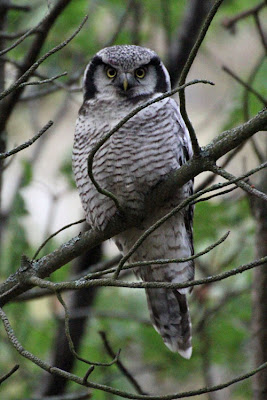 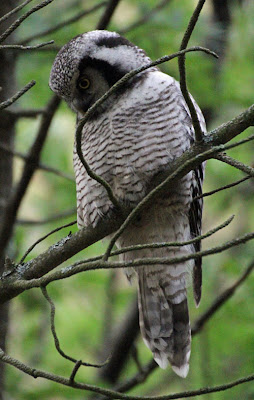 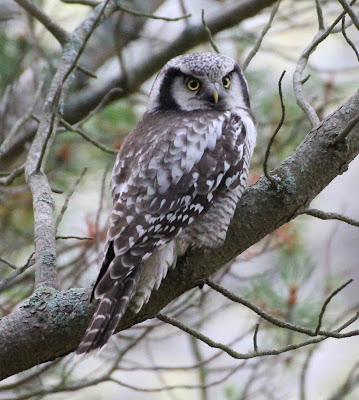 Otherwise I had little in the fading light other than fly over Snow Bunting, Sparrowhawk and Merlin