I didn’t leave the house until 07:15 this morning. Not sure if it was the celebratory beer or a body not used to being on its feet for 11 hours but it was not easy getting out of bed this morning. When I did get out there was hardly a breath of wind in the air and the scattered cover was high so a nice day for birding but would it be a good days for birds?

As I made my way through the streets of Sørland checking the gardens there were Meadow Pipits (heipiplerke) flying over and a couple of Reed Buntings (sivspurv)– it felt like there had been some new arrivals. Two Yellow-browed Warblers (gulbrynsanger) in gardens were definitely new and had company of four Chiffchaffs. As I walked along the road that leads through “Marka” towards the Plantation I had a couple of silent pipits sitting in the middle of bushes that required a bit of work to confirm they were only Meadow. Yellow-browed Warblers were very much in evidence with the birds also calling regularly suggesting new arrivals. I had 7 in total and I hadn’t even come to the Plantation. It definitely felt like something was happening. A phonecall to Kjell revealed they had a couple of Yellw-broweds and a heard only Olive-backed Pipit (sibirpiplerke) in Nordland so I was definitely having more birds in Sørland.

So what was I going to find in the Plantation.......? Nothing new as it turned out but I did refind the Red-flanked Bluetail (blåstjert) which was not seen yesterday and had two more Yellow-browed Warblers bringing me to 11 in total. I had 12 Chiffchaffs during the day but at times it felt like Yellw-broweds were the commonest bird on the island.

The others had by now driven down to Sørland and started by checking areas I had not covered. A Blyth’s Reed Warbler (busksanger) and Olive-backed Pipit were the result! As I started the long walk to where these birds were seen I had to retrace my steps but this time I did not see or hear a single Yellow-browed! They just seemed to disappear as the day wore on. Also to show how difficult it can be even when one is on an island, I checked out one isolated garden with a number of fruit bushes three times. On the first visit I had a single Blackcap, on the second nothing and on the third a Garden Warbler.

I failed to see the Blyth’s Reed in dense vegetation but did finally bump into an Olive-backed Pipit with it flying up calling although I cannot exactly say it was mind-blowing views.
Otherwise there were a number of Redpoll sp. flying around. There have been a number of hornemanni Arctic Redpolls (polarsisik) reported elsewhere in Nordland over the last few days but I had to make do with three exilipes Arctic Redpolls and a handful of Common Redpolls (gråsisik) including juveniles without a trace of red. On the sea there are still many Kittiwakes (krykkje) which perhaps explains why so few have been turning in Southern Norway and a single adult Arctic Skua (tyvjo).

The weather over the next two days does not look too promising for any large scale new arrivals but on my final day (Tuesday) there are easterlies forecast. I leave on the 5pm helicopter so will have 9 hours in the field to find the big one.

There were no great photo opportunites today but I did manage better shots of the Bluetail and a Yellow-browed plus a photogenic Snow Bunting (snøspurv): 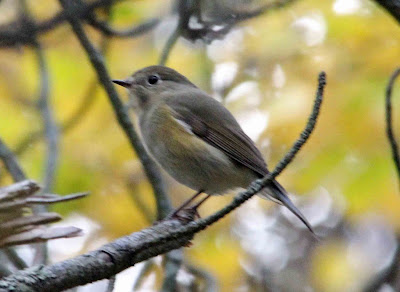