Less than 5cm of snow last night was enough to cause a big change in Oslo’s birdlife today. I started by giving the large Vestre Gravlund cemetery a go hoping that its many ornamental trees would be proving just as attractive as those at the Botanical Gardens. Well they weren’t! A flock of 30 Redpolls turned out to be Lessers (brunsisik). This is the (sub)species that breeds around Oslo but it is unusual to see such a large flock and there is always the uncertainty of separating them from Common Reddpolls (gråsisik). This winter though there is hardly a single Common Redpoll to see though as they have presumably migrated elsewhere.

At Bygdøy, the refugees which have not been reported for a few days were not to be seen and the cold weather has seemingly pushed them off elsewhere to look for asylum. Little else here either except for an unexpected and late flyover and calling Redwing (rødvingetrost) that must have been pushed out by the snow and was belatedly making its way south. The reeds at Hengsenga only turned up a single Wren.

I headed to the Opera area in town where a very rare white-winged gull was seen yesterday. Rarer then either Glaucous (polarmåke) or Iceland Gull (grønnlandsmåke). This leucistic Herring Gull (gråmåke) was first seen 8 days previously in Hamar where it was confused with Iceland Gull for a while. You can see pictures here. It is the two black spots on the back that allow this bird to be identified as the same individual. It is nice when an individual can be recognised and its movements tracked without it having to be assaulted/mugged/snared/trapped/ringed (delete according to your own persuasion) although it wouldn’t surprise me in the slightest to see this bird wearing bling in the near future. I failed however to find it today amongst the 300 or so Herrings Gull sitting on the ice.
Kongshavn had 36 Tufted Duck (toppand) but no Scaup (bergand) and a flyover Common Crossbill (grankorsnebb) was rarer at the moment than the 2BCs(båndkorsnebb) which were my next stop.

There were only the three females left today. A good clue to the fate of the male came when a large female Sparrowhawk (spurvehauk) flew at the three females who were feeding high and exposed in a larch tree. They flew off and avoided the hawk which landed in a neighbouring tree. 10 seconds later the 2BCs landed in the same tree as the hawk before going back to feeding in the larch. Quite reckeless behaviour if you ask me. I am sure that this is also the reason for the gradual reduction in numbers last year and I therefore now reckon there is little chance that these birds are the same as last winters.

The snow had pushed off nearly all the Fieldfares (gråtrost) and Greenfinches (grønnfink) but a minimum of 7 Hawfinches (kjernebiter) were still present. I also found the Long-tailed Tit (stjertmeis) flock and was able to get in the middle of them as they fed in some bushes. As I was trying to take pictures I heard them giving alarms calls and saw a small male Sparrowhawk take one of them less than 5 metres from me! If I had had an enormous dollop of luck on my side then it would have taken the bird I was photographing and I would have captured it all digitally but that dollop wasn’t on my side today. So still lots of reasons to visit the gardens! I searched a couple of places where I have found losts of feathers that have been plucked by Sparrow or Goshawks feeding in the tree above but could nt find any feathers from either a male 2BC or a LtT.

A quick trip around a misty Maridalen revealed no Pygmy Owl (spurveugle) but there were 4 Whooper Swans (sangsvane) on the lake which is starting to freeze over. 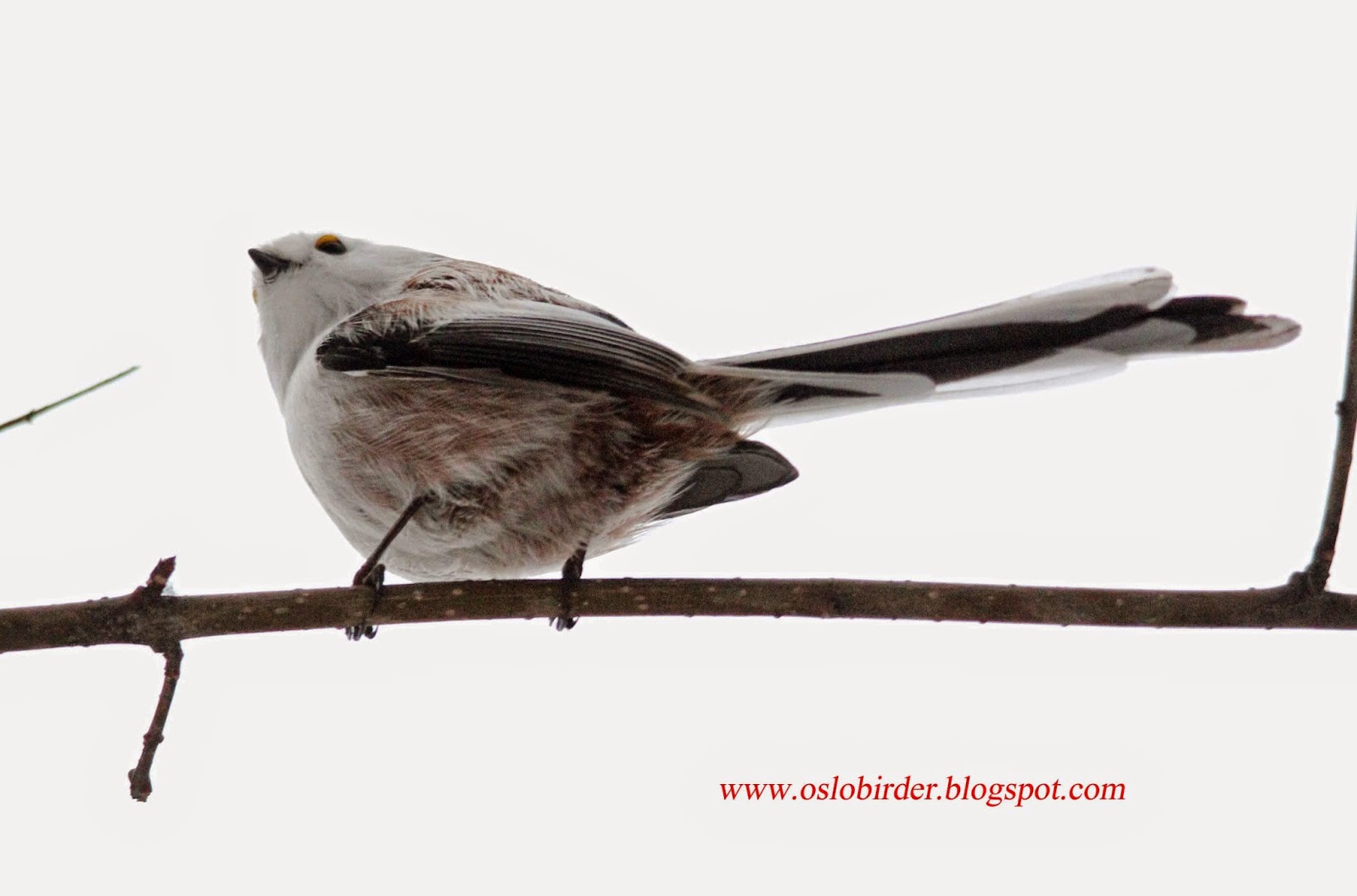 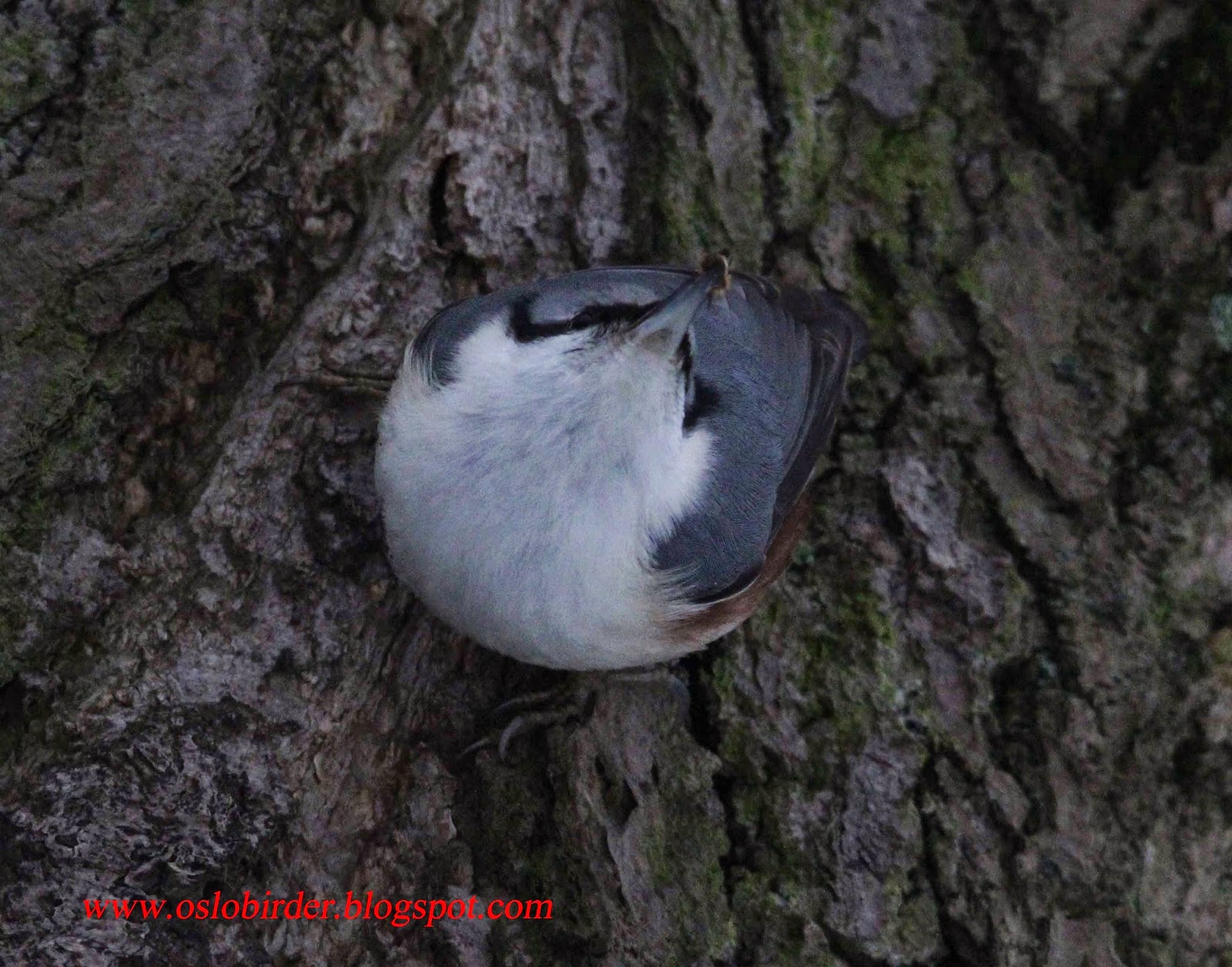 Here is a little reminder of the trumpet call of 2BC