Today was reserved for turbo-charged birding and near death driving experiences: it was time for the Rune and Simon Show!
We covered countless kilometres, got tooted at more times than I care to remember, saw some good birds (although no Hawkie) but most importantly I survived to Bird Another Day! (that could be a good film title!).
Destination was Fredrikstad in Østfold with a major diversion to Liersund to fail to see a Grey-headed Woodpecker (gråspett). This diversion though happened to cause us to be driving over the bridge over the Nittelva river in Lillestrøm at 09:55 when we jammed into an overflying White-tailed Eagle (havørn). A handful of exceptional driving manoeuvres later and we were able to follow this bird as it flew upstream before circling a few times and then heading back downstream. If we had stayed put where we first saw it we would have had great views as it flew low over our heads on its return (the power of hindsight). Instead we were always chasing it. The few pictures I took though allow it to be aged (I believe) as a 3K (2nd winter) this being due to it having moulted its inner 3 primaries, which can be seen in the picture below, – these are shorter and rounder than the 7 outermost primaries which are pointed and retained juvenile feathers. Also I believe that there is too much white in the body feathers for a 1st winter.


After enjoying this unexpected bird we took the inland route south hoping we might find a Hawk Owl or something similar. Instead we had to be content with a Great Grey Shrike (varsler). A stop at Ekebergdalen was very productive though. Here a small river seems to remain ice free no matter what and this little valley has a magnetic attraction for a number of birds in winter. On the river there were four adult Whooper Swans (sangsvane) one of which is partial to bread and comes very close and also two adult Grey Herons (gråhegre) which were also not particularly shy. In addition there were lots of passerines including at least four Bramblings (bjørkefink) which is a good winter record. 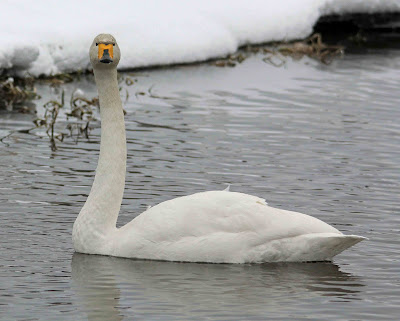 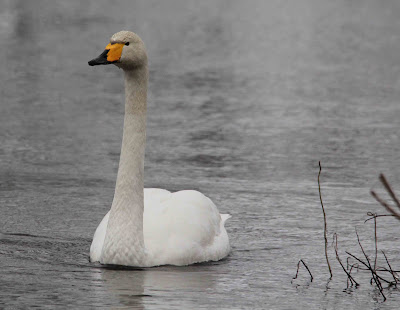 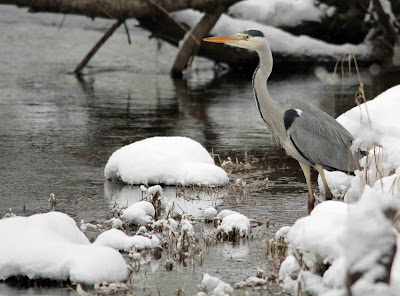 We drove past three Østfold Hawk Owl sites without slowing down – this is the hazard of being an addict in the passenger seat whilst the driver is made of sterner stuff and merely views Hawkie as a little treat ;-)
As we sped past the final Hawkie site though my desperate sixth sense did pick out a small dose of Grosbeak flying from one spruce tree to another. With a little too much enthusiasm the car was emergency stopped, we got angrily touted but some OK views and even some pictures were managed. There were at least five birds but when we parked the car (safely) and walked back to get better views they had gone.
Our target in Fredrikstad was the overwintering “exotic” wildfowl. A quality backing group for these were the resident Carrion Crow (svartkråke) and three Little Grebes (dvergdykker). As we searched for the ducks we followed by hordes of Mute Swans (knoppsvane) – there were at least 70 on the river here and they seemed to be very hungry judging by the way they made a beeline for any person who stopped to look at them. 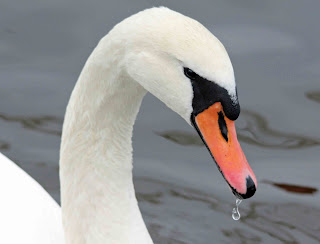 The exotics we were looking for were a male Pintail (stjertand) and male (Gadwall) that are wintering here. These birds were easy to find with 60 odd Mallards (stokkand) and five Coots (sothøne) and were by far the most friendly birds on the river with even the Mallards looking wary in comparison. The Gadwall bore a metal ring on its leg but I couldn’t read any details (I cannot find any record though that it has been ringed recently although I see from pictures as recently as 31 Jan that it wasn't ringed so looks like someone has jumped it in the last few days. EDIT: I see it was caught and ringed yesterday). It wouldn’t surprise me to discover there is a wildfowl collection close by that is missing two of its finest inmates........
Nevermind origin though, these were both fine birds. The colouring of a male Pintail can only be fully admired in close up which is not normally possible for this species. The chocolate brown head, two-toned bill, long scapular feathers and long tail are all exquisite. The Gadwall is also a very intricately patterned bird with the grey feathers on the breast and flanks being especially fine. 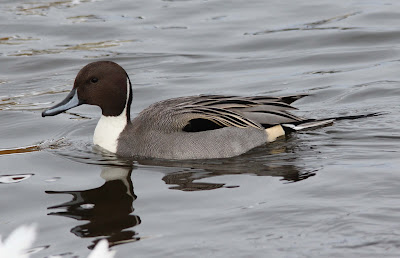 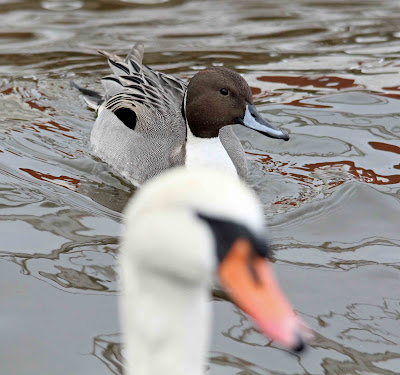 After filling up our memory cards it was time to start heading home with a brief stop at Larkollen to look for some of the raptors I saw yesterday. What a difference one day makes: despite temperatures still hovering below zero, a slight wind had caused all the ice in the Oslo fjord to melt (the same ice that had supported resting seals yesterday) although Kurefjorden was still frozen. The Peregrine was still sitting on the same rock but there was only a single Rough-legged Buzzard to be found today. A White-tailed Eagle was present on the same island as yesterday but instead of being yesterday's 1st or possibly 2nd winter this bird was a near adult (at least 4th winter) with a nice yellow bill and pale head and mantle although we did not see it fly so could not see the tail. It was walking around and peering down and seemed to be preying (or at least attempting to) on the voles (vånd) that inhabit these islands and which the buzzards feed on. From what I can make out this is very unusual behaviour and is either a sign of a very hungry bird or maybe just a smart bird exploiting an abundant food source.

We also picked up another two Great Grey Shrikes on our drive home so the day ended up a 3- 0 thrashing in favour of The Shrikes over The Owls which it has to be said is a very unexpected result this season.

Last but not least today’s mystery bird. My aversion to LWHGs is well known but I have been making a real attempt to shake this off. I therefore spent some time (more than a minute) looking through the gulls in Fredrikstad and noticed this one which looked pale enough to make me shoot off a few pictures. My thought at the time was that it had some characters of 1st winter Yellow-legged Gull. I still think that it does show these features: pale head and breast, dark(ish) eye mask, black bill, dark centres to tertials (but are they dark enough?). I didn’t see the open wing or tail (time was being pressed) which would be necessary to confirm the ID but looking at the pictures now I think it is just a particularly clean 1st winter Herring Gull – the tertials are not dark enough and the bill and head not large enough (?). Or is it a very poorly developed 2nd winter? Clearly I need to spend more time with these birds...