I went looking to see if there is a Med Gull (svartehavsmåke) overwintering in Oslo again this winter but drew a blank. At Marienlyst the Common Gulls were very quick to come to bread this time and I later saw the reason: they had yet to eat breakfast, as the lady who feeds them daily arrived whilst I was there and all the gulls flew towards her ignoring my offerings. There were ca. 100 Common Gulls (fiskemåke), 3 Black-headed Gulls (hettemåke) and a handful of Herring Gulls (gråmåke). I believe that pretty much the entire Oslo wintering population of the two smaller gulls is  based around the bread they eat in this park. No Med Gull though and the lack of any reports since the autumn does suggest that none of the young birds that turned up have stayed for the winter.
After this I realised I needed my fix. 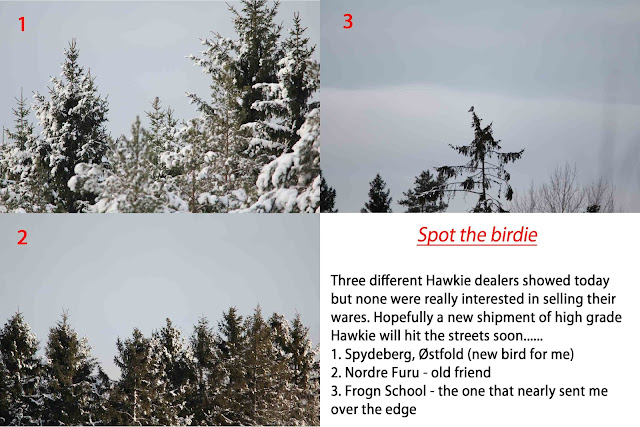 On the way home I checked out the docks in Oslo for waterfowl. Some of the ice has melted so the birds were more spread out. Never-the-less I found the Little Grebe (dvergdykker) and also had a good concentration of at least 500 Goldeneyes (kvinand) at Vippetangen.