Three-toed Woodpecker (tretåspett) is widespread in Norway in its preferred habitat of mature spruce forest. It is however unobtrusive and occurs at low densities. This helps explain why it took me 10 years to see my first bird and that I have only seen one since (plus one heard drumming). On the flip side it is completely unshy and allows close approach such that when you do see one you normally see it well.
Another reason I have seen so few 3 toes is that I have rarely made a specific attempt to see one. Today though was different: birds has frequented a relatively small area of mixed woodland on Jeløy island in Østfold for the last few winters and therefore should be possible to find with some patience.

The best method for finding one is to stop and listen regularly for its tapping noise as it feeds. I did this and after an hour I had heard the tappings of (and subsequently seen) a single Great Spotted Woodpecker (flaggspett) and a Nuthatch (spettmeis). I was determined to find the bird though and therefore started retracing my steps. I heard a weak tapping that was coming from not too far away. I located the source and it was a small bird with a white belly high up in the branches of a dead spruce. I immediately thought Nuthatch but then I saw its back and it was clear I had scored. Straight away it flew off (with noisy wing flaps) but this time was much easier to find as it tapped loudly in trees about 20 metres away. It was also low down and allowed me to watch it really well. There is something prehistoric about the look of these birds and given their specific habitat preference and low densities I assume that in terms of evolution that they split off from the other woodpeckers a long time ago.

I was able to enjoy it for 5 minutes before with loud wing beats it flew off further into the wood.
The white as opposed to yellow crown mean this is a female although the white is more extensive that I would expect from the literature. Due to poor light it was quite challenging taking photos even though I was close to the bird and it was low down (all pictures were with ISO 6400). The video though turned out quite well despite my hand shake! You can see how it knocks off the bark searching for insects and does so on small branches as well as the tree trunk. 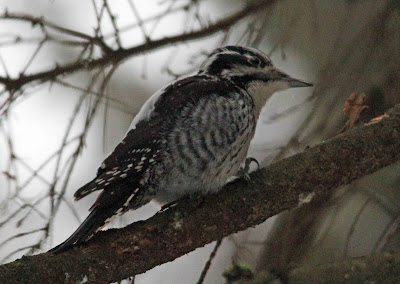 On the way home I went searching for new Hawk Owls without any luck although I did discover some fine wetland habitat at Bjørnerødvann which I will have to visit in the spring. My first drumming Great Spotted Woodpecker of the year and a calling Black Woodpecker were the best I could muster.

Feeling the need to get my weekend fix I drove past, and failed to see the Nordre Furu bird but the Frogn School bird was easy to find as usual. I spent some time with it but in typical fashion it did nothing but sit at the top of the tree and look around: no flying, no hunting, no calling. This bird obviously finds enough to eat but in contrast to the woodland at Åsermarka yesterday there were no rodent tracks to be seen in the snow.