It is half-term holiday this week and today the kids and I visited Frognerpark in Oslo. Whilst the girls fed the Mallards (stokkand) I was able to look through them to see if there was anything more interesting. The two female Teal (krikkand) that have wintered here were easy to spot but there were no diving duck (a few Tufted Duck have been reported recently) and on the upper lake there was a single Grey Heron (gråhegre).

There was one interesting duck amongst the Mallards. I reckon that it may be a second generation hybrid with Wigeon (brunnakke) but have received feedback from Norway's finest (who is rarely wrong) that it is actually a female Mallard with hormone deficiency: it is lacking estrogen and therefore resembles a male (such birds are also supposedly a regular occurence). I have seen many odd Mallards in my time but cannot recall a bird like this. Here is a picture of a first generation hybrid. My bird is obviously not a first generation hybrid but I still think it could be a second generation. A male Wigeon has wintered amongst the Mallards at Frognerpark for the last few winters (although not this one) so would be a potential source of wayward genes. My reasons for thinking hybrid influence are that the bird was slightly smaller than surrounding Mallards (of both sexes), the head shape was, to my eyes, different from Mallard, the grey vermiculations on the flanks were darker than on surrounding male Mallards and therefore more like Wigeon and most importantly the head pattern strongly resembles the first generation hybrid in the link.

However, given that I am not much of a supporter of the idea of the pale gulls being hybrids maybe I should just agree that it is a butch female Mallard?

EDIT: After review of some online articles it is clear that this is indeed a female Mallard lacking estrogen. See here and here 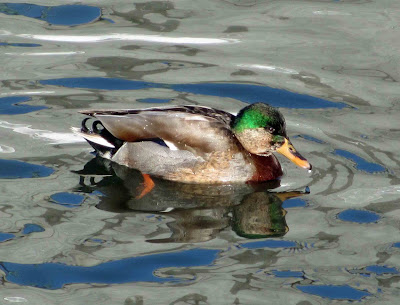 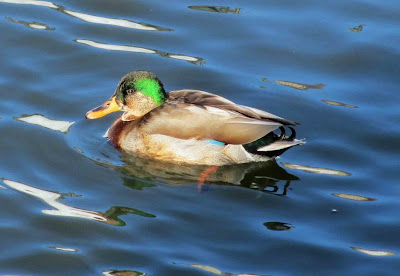