Grosbeaks and Hawkie still to be found

Today I was in Østfold with the pleasant company of Per Buertange and Lief Bjørn Lunde. We went searching for grouse and Three-toed Woodpecker (tretåspett) in Åsermarka, an area of relatively pristine forest near Askim. Cloudy conditions were not conducive to life in the forest and our two hours of walking through some great areas of forest with many dead trees was not interrupted too much by avian action. We were lucky to be able to walk, as opposed to ski, at this time of the year but there has been little snow in these parts. The thin layer of snow though was in places covered with rodent tracks which bodes well for breeding owls this year.

Highlight was a flushed male Black Grouse (orrfugl) seen only by yours truly and PB, otherwise our bird count was one seen and one heard Treecreeper (trekryper), two heard Goldcrests (fuglkonge), one heard Green Woodpecker (grønnspett), one heard Raven (ravn) and a single seen Bullfinch (dompap). No sightings for us of Capercaille (storfugl), Hazel Grouse (jerpe), Three-toed Woodpecker or Pine Grosbeak (konglebit) which have all been seen here recently.

Driving back towards Askim the days highlight came in the form of a flock of Pine Grosbeaks (konglebit). As usual I spotted them whilst driving and they were perched up in a couple of spruce trees and birches along a stream in some agricultural land. They showed well for a couple of minutes before flying off low to the north and were presumably a flock on the move that had just stopped off to devour the buds on a suitable looking tree. As is usual with this species we woefully underestimated the flock size when they were in the trees. We estimated 10 but when they flew off could see there were 35!! In the field and in the pictures I took I cannot see a single red male. The birds were not that close so the pictures are not too great but I managed a flight shot and also one picture has the highest numbers I have yet managed to get in a single shot. 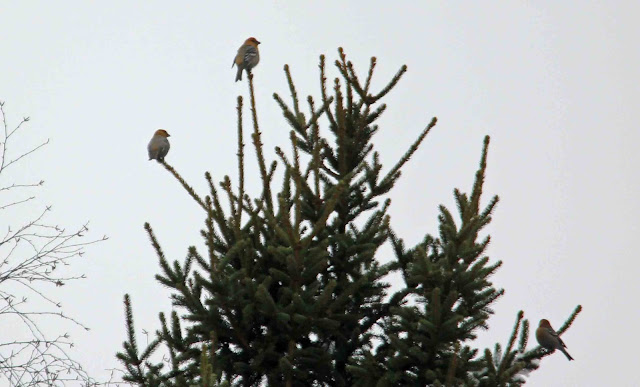 After this excitement Lief and I then went looking for Hawk Owls (haukugle). We couldn’t locate the bird at Spydeberg but found another one a little to the north which was discovered yesterday. This bird sat high on a spruce in the middle of a copse and I wouldn’t have seen it unless I knew to search in the area. Always nice though to have both of this winters star birds on the same day.

A quick stop at Ekergergdalen, Børterelva showed the four Whooper Swans (sangsvane) were stillpresent. I photographed one pair and noticed that one of the birds has a paler iris which I have never before noticed on a swan (usually the iris is black).

I also had a single Great Grey Shrike (varsler) today so there was a 1-1 draw with the owls but the Grosbeaks were the real winners today.
Lagt inn av rixy kl. 21:23