Despite putting in a lot of effort the Hawk Owls (haukugle) could only manage a draw against the Great Grey Shrikes (varsler) today and it required a late equaliser to secure the draw otherwise it could have been a very different result that would not in any way have reflected the respective efforts put in by each team.

Today, after a long birding free weekend I needed my fix so my chosen route took me past six different Hawkie dealers with three showing well including a new bird near Skiptvedt in Østfold. This now brings my total of Hawk Owl in the last 12 months to 19 different birds (Finnmark 2, Nordland 1, Rogaland 1, Vestfold 1, Oslo 2, Østfold 7, Akershus 5). Given that I had only 3 separate records before this (one being a family at the nest) then it is easy to see how exceptional this invasion has been. 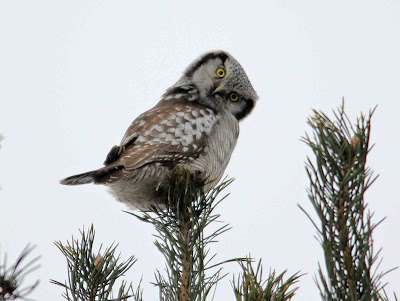 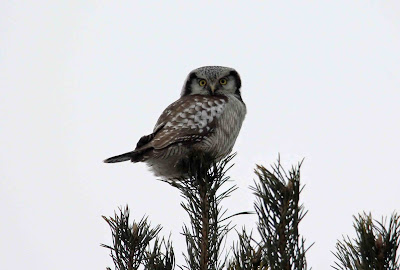 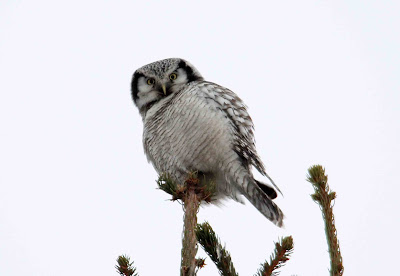 At Kurefjorden I had only two Rough-legged Buzzards (fjellvåk) as birds of note.

If it wasn’t for the Hawk Owls and Pine Grosbeaks (konglebit) this winter then the birding would be quite dire. It does seem though that every winter has its influx that keeps things exciting around here – last winter it was scarce gulls with Iceland, Glaucous and Mediterranean keeping things interesting.

Pine Grosbeaks are getting harder to find around Oslo although there has been a recent upsurge in records to the south in Østfold. Hawk Owls though are still going strong although a lack of recent records from some of the long-stayers suggests that a few birds have moved on. New birds are still being found though and some of the other long-stayers remain easy to find.
Lagt inn av rixy kl. 22:23