An unwanted and unmerited armchair tick

Even when birding is slow and you don’t even leave the house and just enjoy the comfort of your armchair it is still possible to add a bird to your list. A so called armchair tick (sofakryss in Norwegian) is when a committee has made a decision that suddenly adds a species to your list that you hadn’t expected at the time you saw the bird (although birders do also engage in “insurance ticking” of birds that they can’t add to their list there and then but know that in the future a decision might be taken that will give them an armchair tick). Armchair ticks usually come from “splitting” where an existing species is split into two or more new species, but it can also come about through a change in the category of a bird. Some records are categorised as meaning the bird is considered an escape from captivity and therefore not truly wild and therefore not “tickable”. If an old record is recategorised though this can mean one can gain (or lose) a tick. Are you following me?

I had been out this morning and had heard a Bearded Tit for my endevaours and then came home, plomped into the metaphorical armchair, checked Facebook and saw that I had a new tick! The only problem is that it is a tick I don’t want and a record that I do not believe should grace the official annals of Norwegian avifauna.

As a result of a category review of all Norwegian Red-breasted Geese a bird previously deemed not to be wild has now been recategorized to be as good as they get. Back in 2012 there was a Red-breasted Goose at Fornebu for the whole summer. Here are a couple of pictures of it that have made their way into the family album: 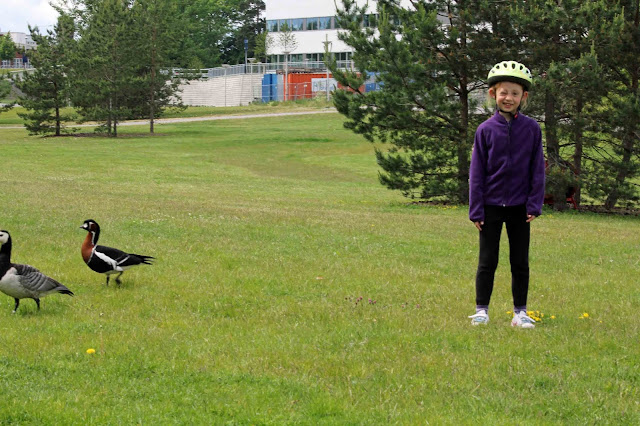 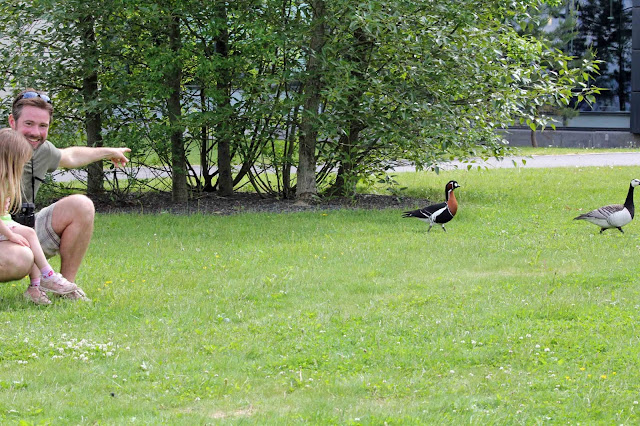 It kept company with the local feral Barnacle Geese, gazed the grass in parks, allowed approach to within a metre or so and is likely to be the same bird that had been seen on one day at Fornebu in June 2010 (an unlikely repeat occurrence for a wild bird). Apart from the fact that this bird was unringed there was absolutely nothing to suggest a wild origin and an origin either from captivity or from one of the feral/escaped populations in northern Europe is by far the most likely (a tremendous number of feral Bar-headed Geese migrate to Norway every summer from Germany/Holland but nobody has attempted to argue that these are wild). It can be argued that other wild geese have joined the local feral birds and adopted their ways but we have no local records of either White-fronted or Bean Geese that approach this bird in terms of having over summered and been so tame.

The original decision had been to put the bird in Category D (not saying it was a definite escape but mostly likely to be) but as a result of the review of the category of all Norwegian records of Red-breasted Goose it has now ended up in Category A and deemed to be as wild as they come. I know that a consistent methodology has been applied in the review, that the NSKF has put a lot of thought into the review and that each decision has a reasoning behind it. But at the end of the day it seems it is only the presence of a plastic ring or if the goose was alone (rather than having been clever enough to join up with the other local feral geese) will result in a bird being classified as an escape (Category E) and this is just too simplistic.  It has the undoubted advantage of being an easy and simple policy to apply (and is consistent with Ruddy Shelduck although at odds with Snow Geese which are all considered dodgy) but is not in my opinion a smart policy. If this policy is applied to Lesser White-fronted Goose then Norway may soon have to accept Swedish reintroduced birds as being wild and welcome them rather than the current policy of shooting them when they cross the border – maybe a Trump style Wall is needed here 😉. I know from my time in the committee that discussions on categories are difficult and do not engage people and I would not have been looking forward to such a discussion myself – it is much more fun discussing ID features – but I don't think decisions like this do anyone any favours. Then again I only have myself to blame as if I hadn't stood down from the committee then I could have affected the decision making.