As regular readers will know I follow the comings and goings of the Taiga Bean Goose population that winters in Scotland, breed in Sweden and pass through Akershus close to Oslo each spring and autumn. The GPS tags have stopped transmitting after a couple of years with the solar driven batteries having died however sime of the birds have radio tags from which data can be downloaded if one can come close enough to the bird with the right equipment. Data from two such collars was downloaded at the end of October showing birds that use two different migration routes - part of the population migrates through Sweden and doesn't (at least in 2014) use Norway at all. One interesting thing from the plots is that one bird has a cluster of plots in the North Sea suggesting it rested for a least a few hours in October when it flew from Norway to Scotland. 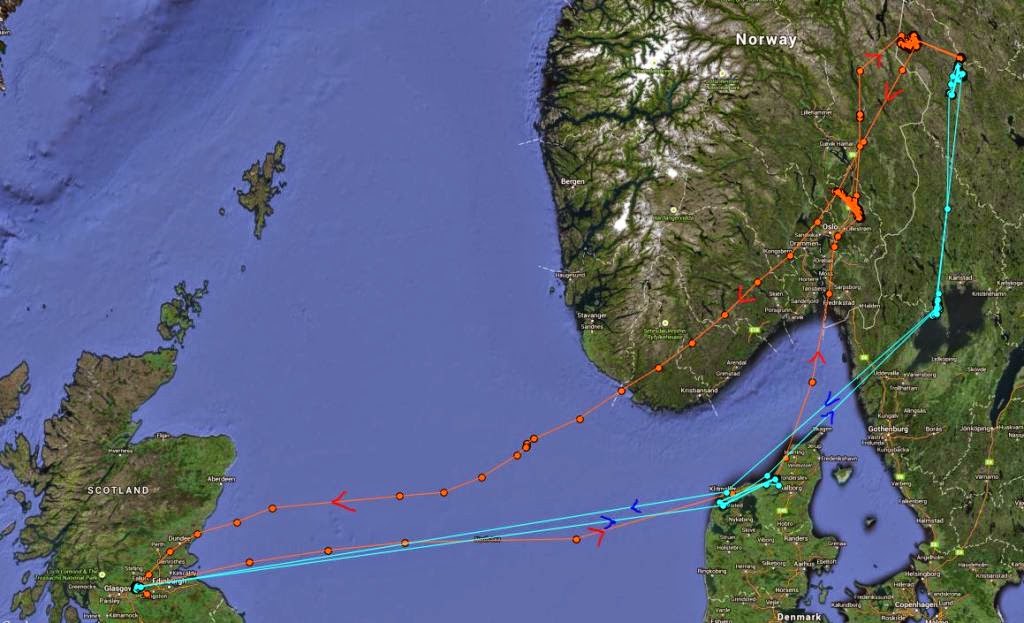 This seemed very interesting but I just discovered on Twitter some even more amazing pictures. A group of 6 Bean Geese (probably a family group) were on an oil rig 100 miles East of Wick right in the NE corner of Scotland) yesterday.  I'm not sure whether they are Tundra or Taiga Bean Geese (the one I link to below looks like a classic Taiga to me but another picture shows birds looking like Tundra) but if they are Taiga then there must be a good chance that they are part of the same population as there are not so many Taiga Beans around and the research shows them to be very loyal to the same sites and migration routes. Maybe this family were migrating late due to a weak or injured youngsterand hit bad weather which knocked them off course?

#beangeese RT @mrkjduffy: this one was totally exhausted but perked up. the rest waited till 5pm then left it behind pic.twitter.com/2XTvaOAMMx
— Mike Buckley (@bucko41) November 17, 2014

Here is also a blog entry of another 3 Beans (these ones seemingly rossicus) landing on a boat east of Aberdeen. Clearly something strange going on.
Lagt inn av rixy kl. 21:11