A long and rewarding day which started by me discovering that woodpeckers can clearly differentiate between themselves even if I have problems. I had a leisurely start and found myself in Maridalen at 0930. After first seeing 8 Lapwings (vipe) on the fields at Skjerven (hopefuly leading to 4 breeding pairs?) I checked the usual locations. There was low cloud and patches of mist but it was windless and this seemed to be liked by woodpeckers with at least 3 Green calling and a couple of Great Spotted drumming. I decided therefore to go hunting for Three toed. I drove through the forest and stopped in likely areas and played the sound of a drumming Three-toed (tretåspett). At one location i heard a tapping woodpecker but the recording of 3 toed had no effect on it. I switched to Great Spot (flaggspett) and immediately it flew in and started calling and confirmed its identity. Continuing on I tried the spot where Per Buertange and I had a male 3 toed last spring. I played the drumming and stopped and listened. Nothing. Played and listened. Nothing. Tried it one more time and a silent woodpecker flew out of the trees and over my head. It landed in a birch and was indeed a male 3 Toed!! It then flew to a telegraph pole and briefly drummed and called before flying into the trees whence it came. This must be the same bird as last year (it even chose exactly the same pole) but whether it is resident here is another matter. I have searched this area many times after our sighting last year and have never suspected the presence of 3 toed or any other type of woodpecker for that matter. I will definitely follow up though in the coming weeks as a nest site would be great to have. 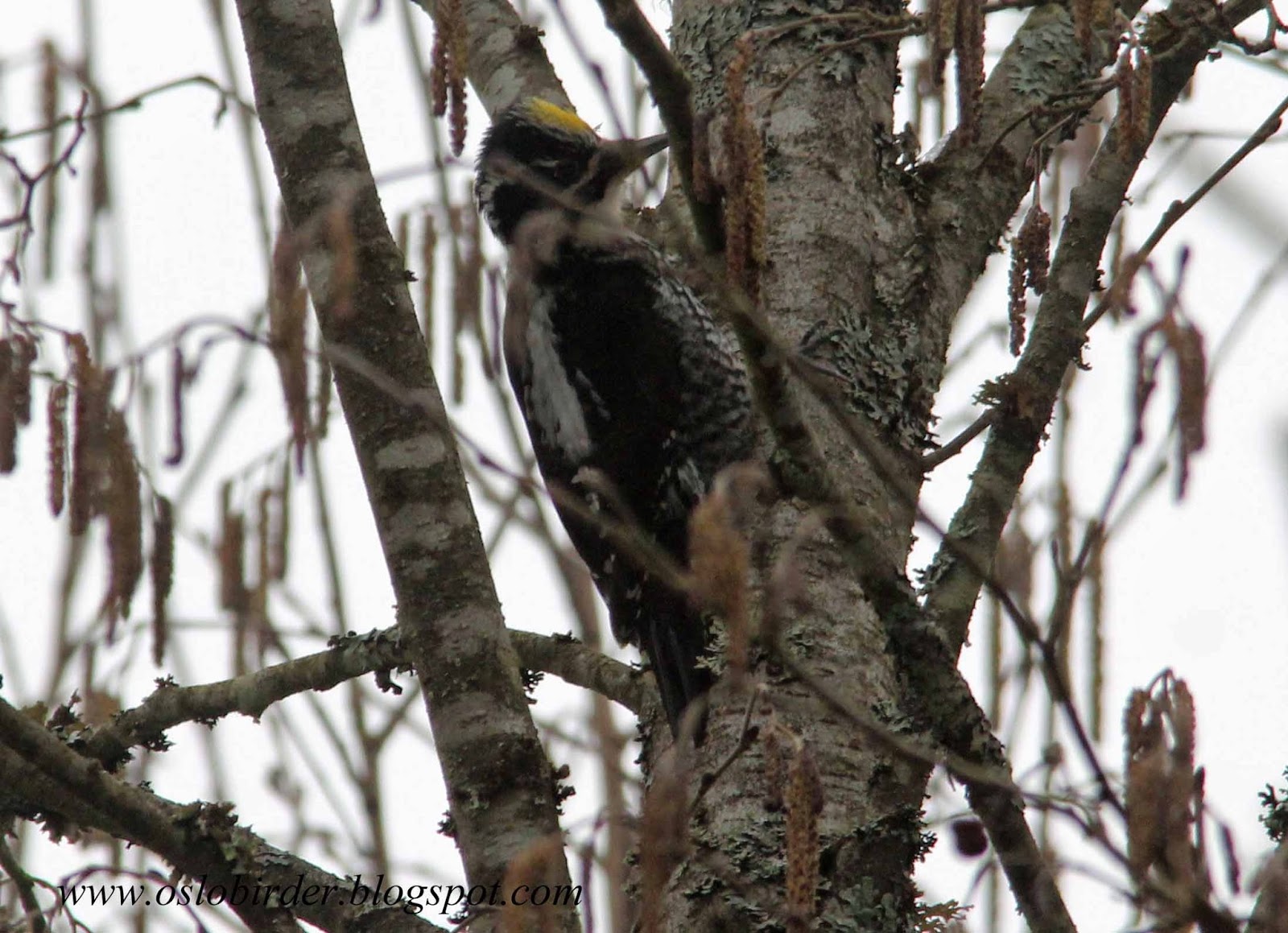 Quite happy with myself I set off on what was my main target for the day: Bean Geese. I had seen yesterday’s locations for the tagged bird 07 (06 is still in Denmark) and had arranged to be sent today’s morning plot as early as possible ("live" updates are currently possible due to the sunny periods having charged up the battery sufficiently to pull out data more frequently).
I received an email showing they were in the same (new) field as yesterday and made haste. A no entry sign failed to stop me driving up a nice road that took me to the edge of the field where the plot was and as Garner would say BOOM. The flock was present.

Clearly the same as before due to the presence of the two White fronts (tundragås) and two Pink feet (kortnebbgås) it had grown slightly in size. Counting was not easy though due to undulating ground but I came up with a minimum of 151 versus 139 10 days ago. I read 11 collars and saw 5 other radio/GPS collared birds where it wasn't possible to read the inscription. All the birds I had previously read were present with 2 additions.

Even though they were all together they flew off in small groups to the north between 1240 and 1306 leaving 8 birds on the field which were still present at 1326. The birds flew off towards the peat bog at Flakstadmåsan. The birds had alternated between active feeding and sleeping and there was no obvious disturbance. So why they needed to move is unclear to me. It is also interesting that they do not move as one. My hypothesis for them flying to the peat bog in the middle of the day (yesterday the GPS data shows they flew to the river) is that they need to drink and the bog at Flakstadmåsan does have small ponds. This can also explain why they flew off separately as the need for a drink was presumably far more acute for some of the birds than for others. The choice of the bog today instead of the river might be down to the strong southerly wind making it easier to fly north although they would of course have to face the wind on the way back.

My two hours of observing them revealed very little else although two crossbills that flew strangely low over the field into a head wind towards a pine wood were so large and bull necked that they had to be Parrot and the call was good too.

Eating lunch at the river at Udenes revealed nice muddy banks appearing although the sandbank that the geese normally roost on is still just under the water surface. A few Whooper Swans and Mallards were present here plus a bitter wind.
Returning to the field at 1515 90 Bean, 2 White front and now 3 Pink feet (although I had presumably just missed one earlier) were already back and actively feeding to be shortly joined by another 50 or so. This was a bit short of the flock I had earlier but no others joined them whilst I watched until 1700.

I made my way down to Udenes to look over the river and wait for roosting birds. I arrived at 1715 and saw no geese straight away. Then at 1800 I met someone who has a far more serious Bean Goose addiction than myself – far, far worse! Thomas Heinicke from Germany spends his own time travelling around Denmark, Sweden and now Norway recording Bean Geese and neck collars. He had already seen some of these birds on their staging grounds in Denmark in February and was now in Sweden looking at other populations so thought he would “pop over” to Norway. We will meet up again tomorrow.
As we chatted I suddenly noticed at 1815 that 37 Bean Geese were standing on the (submerged) sandbank. It was annoying to not have seen from whence they came but then at 1835 50 flew in from the north and another 3 at 1854. By 1905 it was too dark (and I was too cold) so I left before the whole flock arrived.

Looking forward to what tomorrow brings....