I'm a happy man today, make that very happy! Despite constant rain, strong winds (although their southerly direction was the right one) and general greyness Per Christian and I decided to go on yet another wild goose chase. This time we dropped the Glomma as I didn’t believe there was any chance of the geese turning up there for at least a week and headed first for Bjørkelangen. We briefly checked out Svellet and Snekkervika in Nordre Øyeren which despite being ice free and having exposed muddy edges were as good as bird free – clearly there is no food here yet. Merkja was still full of Whooper Swans (170) though and the Brent (ringgås) is still there. Here they are feeding amongst flooded reeds and grass which seem to provide a lot of organic sustenance.

At Søndre Haneborg the Bean Goose (sædgås) flock was still present but equally wary and despite our best intentions flushed at a distance of over 300 metres. I still want to get a good look at all the geese but today’s views on the ground and in flight seem to confirm that there are 32 fabalis and one rossicus. A flock of 70 Lapwing (vipe) on the fields was very high for such an early date and we even heard their evocative display call which for a second made me forget the rain driving into my face.

We checked out the flooded fields at Kjelle and Bjørkelangen but had just the same numbers of Whooper Swans, Greylag and Canada Geese as yesterday. We planned to drive down to the flooded valley at Bergsjø and try to find access points which we failed to find yesterday (after having done some research overnight) but I heard I had an email and checked on my phone. It was a really exciting mail! One of the researchers of the Scottish Bean Geese had been in Denmark yesterday and seen that a flock of 40 birds containing the satellite/GPS tagged bird 07 had flown off North East i.e direction Oslo! Then the latest data download confirmed that the birds were on their way. The overnight plots had shown that they had turned round at some point and the last plot was from Lysakermoen which is a well known wetland and a good place for them to rest. The weather was good in Denmark yesterday but at some point on their journey they would have hit the rain and low cloud over Norway which may have pushed them down.

I now suddenly wanted to head for the Glomma but PC wasn’t so sure that the birds would be there but I persuaded him..... So 40 minutes after reading the email we stopped the car at the fields at Horgen (after having already checked out the river at Udenes with no success). A scan of the stubble fields initially revealed nothing but as I finished a scan along the edge of some woodland I saw geese!!! They were in slightly unudualting ground right up against the woodland which would have been giving them shelter from the wind and rain and not only did we have Bean Geese, we had at least four with collars (confirming they were the Scottish birds) and also two White-fronted Geese (tundragås). It was difficult counting them but I came up with 43 Bean. Then we had a flock of 9 come in purposefully from the south, presumably directly from Denmark and one of these was also neck collared. We didn’t make any attempt to get close enough to read any collars – that can wait until better light which is forecast for next week but it was a hugely uplifting experience to be seeing these birds again and also thinking aboiut how the technology allows us to know so much about them and find them! These birds are here record early so it will now be interesting to see how long they on site. Brian from Scotland is visting to see them in a month’s time so we hope they stay that long.....

On the way back we once again checked out where 25 Pink footed Geese (kortnebbgås) had been reported two days ago. This time we came as good as confirming my suspicions when we found 28 Bean Geese but these were not fabalis as I had expected but rossicus (also easier to confuse with Pink-feet). These birds were resting on a muddy field close to the road but one which we had not given any attention to yesterday. These arrivals of Bean Geese of both subspecies are to my knowledge unprecedented although it could well be down to low (very low) observor coverage rather than something special this year.

The day finished off in Maridalen where the lake is nearly ice free with the remaining ice having been pushed up into the northerly bays. This is two months earlier than last year! 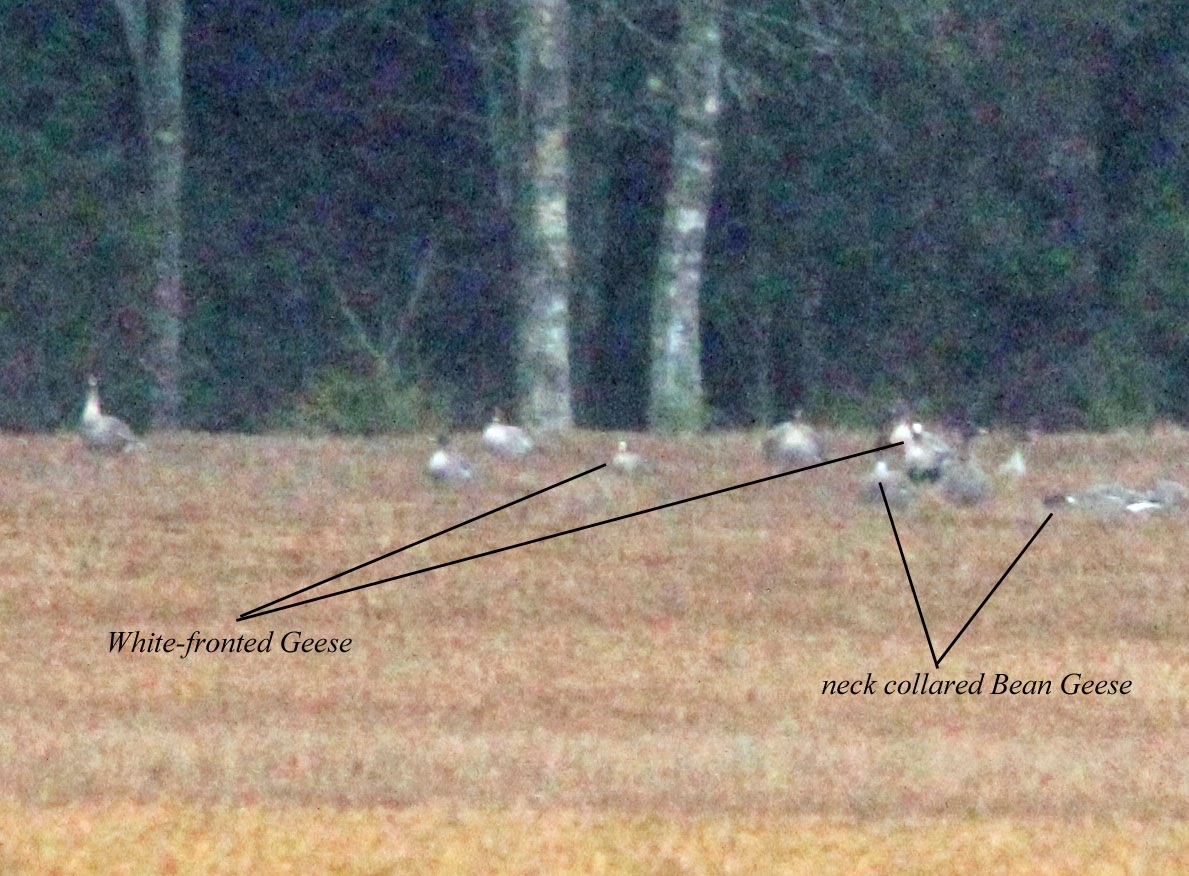