I'll write this post chronologically thereby saving the best until last.
It was warmer today with a rise in the temperature to a barmy -10C. But with a fresh northerly wind blowing it felt bitterly cold. Kurefjorden was therefore probably not a good choice but I hoped the cold weather could have caused an influx of waterfowl escaping frozen inland lakes. The wind was making the water choppy which was stopping it freezing and making viewing difficult but the biggest problem I had was heat haze!! The warm(er) water was generating a heat haze that made viewing through the 'scope nearly impossible. Highlights were a distant White-tailed Eagle (havørn) and two Rough-legged Buzzards (fjellvåk). There had been no influx of waterfowl, more like an exodus.
Driving home I started getting a cold sweat as I approached Moss and despite my best intentions I gave into my addiction - my body craved a fix. It took some time to find my dealer but eventually I found him hanging around by the side of the road. 15 minutes in his company and i was buzzing :-) 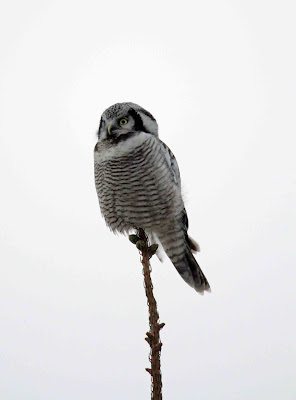 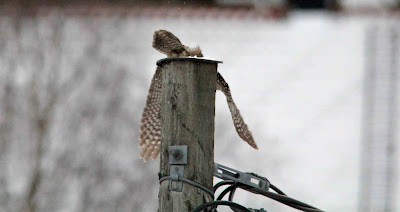 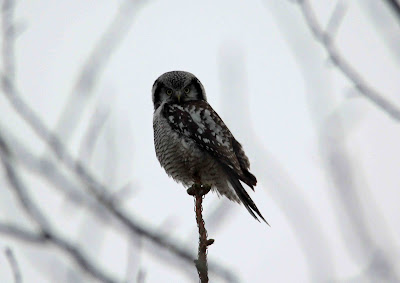 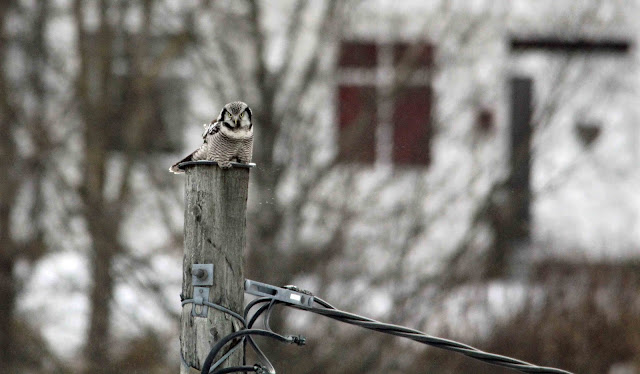 I tried to score some more Hawk Owls (haukugle) on the way home and also unsuccessfully searched for a Great Grey Shrike (varsler) I had seen from the motorway on the way down.
Arriving back in Oslo at 14:15 there was still enough light for a quick trip around Maridalen. The lake still had some open water which held 15 Whooper Swans (sangsvane) and rarest of all a single Mute Swan (knoppsvane) which is a proper rarity here (strangely I see that others have reported 13 Whoopers and 3 Mutes - I will need to double check tomorrow!). Ever hopeful I drove towards Skar hoping the owl would have returned (it hadn't). Before getting there 6 birds flew over the road and landed in the top of a spruce. No mistaking that silhouette - Pine Grosbeaks (konglebit). I parked the car and walked back 150m. Even though they were still in the same tree it took me a few minutes to locate them as they were completely silent and often fed in the depths of the tree. In the 10 minutes I watched them they stayed feeding in the same tree and didn't make a sound - talk about unobtrusive! There were two adult males, 1 1cy male and 3 female plumaged birds. These could very well include the five birds I saw only a km away on 29 October which included two adult and one 1cy male. These particular birds are the dictionary definition of unobtrusive and a generous dollop of luck is needed to find them: they don't call and stay buried in the top of the same tree for at least 10 minutes. Here are some grainy shots of the Grosbeaks. 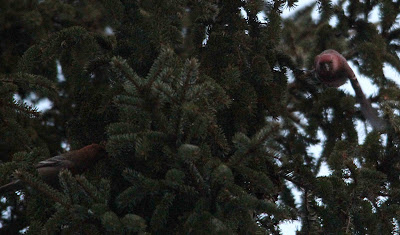 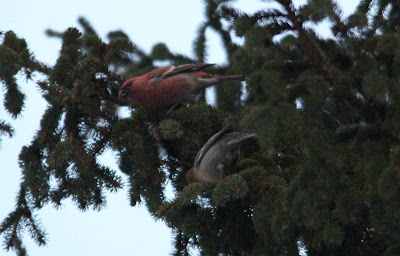 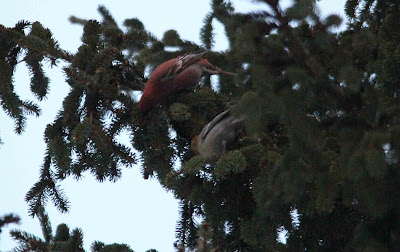 Today though brought me closer to my dreamed of (and hugely unrealistic) photo opportunity of Hawk Owl and Pine Grosbeak together. I have now seen both species on the same day and have also seen both species at two separate locations (Moss and Maridalen) although not same location and same day. I just need to see both at the same location on the same day and then try to get them talking to each other.
Here is an artist’s impression of my dreamed of photo (well the real dream is a lot more bloody with the owl eating the grosbeak, so this the PG version). 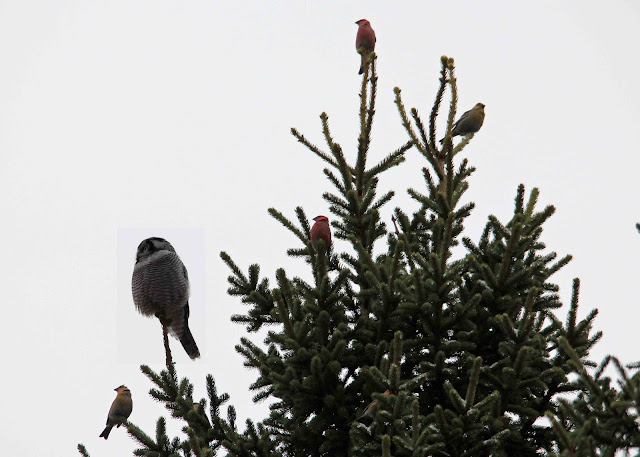