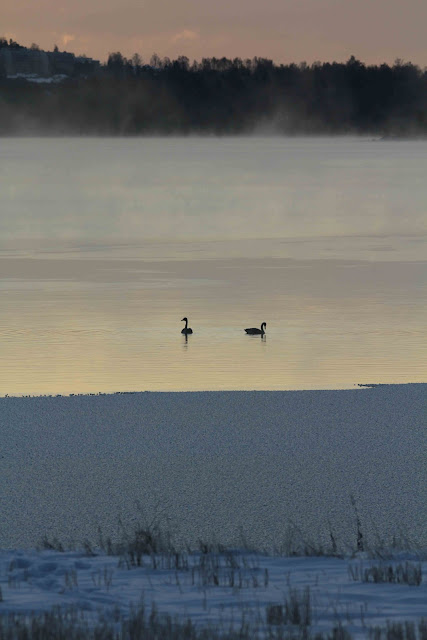 It was -17C in Maridalen today but what fantastic weather! There was not a puff of wind or a cloud in the sky. The lake (Maridalsvannet) was literally freezing before my eyes: early in the morning it was ca.10% frozen and by mid afternoon was 60% frozen. In the morning there was a cloud of water vapour over the lake as the last heat in the water was sucked out by the cold air. I suspect it will be all but completely frozen tomorrow morning. 17 Whooper Swans (sangsvane) that were on the lake in the morning were not to be seen mid afternoon presumably as they could see the writing on the wall.

Today I was going to pin down Grosbeaks (konglebit) - the complete absence of wind was going to make it easy to hear them. Birding in -17C is however not that easy. After nearly 12 years in Norway I know how to dress for these temperatures but to hear you need your ears exposed and that very soon becomes uncomfortable. I was out for three hours and walked 10km. During that time the water bottle in my rucksack froze as did an apple which became very unpleasant to eat. The battery on my iphone would not work and I had to have the phone inside my glove for 15 minutes to warm it up. Was it worth it though? Well the walk was pleasant and I did hear a Grosbeak but I didn’t see one. I heard the Grosbeak right by the car park where I started the walk. I heard the call that precedes the flock taking flight (based on the sightings we had of a flock in Oppland a few weeks ago) and although the call was only coming from 30metres away I never got my eye on the bird(s) before they moved on. I felt sure I would encounter more in my 10km walk but was to be disappointed. A couple of encounters with Black Woodpecker was the highlight.
Lagt inn av rixy kl. 15:38