An addict becomes good at hiding his dependency from those around him. Today Rune thought that we were going to Halden to look for a Kingfisher (isfugl). A Kingfisher has been seen there and yes, it is only the 5th one seen in Norway this year (after the run of cold winters killed off the small Norwegian population), and yes it would be a year tick and yes it is a nice bird, but that was not the real reason for the trip. I needed my fix and thought there might be some good stuff to be had in Østfold.

As it turned out I nearly over-dosed and will be booking myself in for some intensive anti-addiction therapy as even I can now admit I have a problem (and that’s the first step, right?)

I kept up the pretence that we were looking for Kingfisher for 2 hours even though it was bitterly cold (-15C), we were close to a smelly sewage treatment plant and could see Norway’s only nuclear reactor – boy is Halden an attractive town! For our troubles we did see a rare winter Moorhen (sivhøne), Dipper (fossekal), Long-tailed Tits (stjertmeis) and a few duck including a Teal (krikkand).
I didn’t need to reveal my need for a hit to Rune as I knew he would want to move on before me. I deftly suggested that the scenic trip through forests close to the Swedish border would be a good route home. I mentioned possible Capercaille (storfugl) and Golden Eagle (kongørn) but that was just a smoke screen. As we drove from Halden towards Ørje we drove through frost covered farmland with scattered woodland. A Great Grey Shrike (varsler) was nice but my habit is for much harder stuff now and I was getting desperate.

With my level of dependency you develop a  highly tuned radar for possible dealers and I spotted one hanging around, as usual, close to the road. I was still in control of my craving though so I casually mentioned to Rune that there may been a dealer but it was probably just a Crow (kråke). He had to reverse the car so we could see it and yes it was my dealer. I was still acting nonchalantly though despite my stomach already aching in expectation of what was coming. I let Rune go ahead of me and get his fill whilst I quietly savoured my first hit of the day. Enjoying my high we then continued past Ørje and towards Rømskogen. I was in another world and it was Rune who spotted the next dealer (I am worried that he too is becoming addicted). Now there was no holding us back as we both filled our boots. Giddy with the high we continued driving. By now I was good for nearly nothing but Rune spotted something in a field – a fox. After enjoying this we were about to drive on something attracted my attention. Another dealer! This one shamelessly sitting out in the open in a garden! This was too much, I tried to resist but I couldn’t stop myself and had my third hit of the day. With such undiluted, high quality stuff this is a dangerous amount and I nearly overdosed! As I sit here now I realise how lucky I was not to go over the edge and realise that I have an addiction. There you go, I said it: “I AM ADDICTED TO HAWK OWLS”.

To try to show to everyone that I am serious about treating my addiction I will only show two pictures of each owl although would have loved to show more!

Three Hawk Owls (haukugle) in a day in Østfold must be unique experience and in addition all were new birds. All were in farmland, by roads and in the vicinity of houses. The first one was 150 metres from the road and caught a mouse in front of our eyes so gave me my first successful hunt. It flew fairly directly from the tree top towards the prey without hovering although did use its tail as sort of brake to control its descent before dropping in the grass. It caught the mouse in long grass so we didn’t witness the actual capture and of course the autofocus couldn’t keep up with the action but we did see if flying off with a rodents tail dangling out of its talons.

The second one was sitting right by the road and gave the best views in great light. 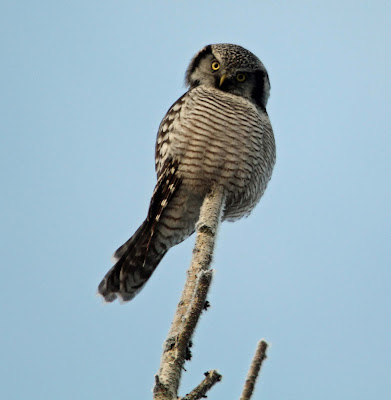 The third bird was sat 10metres from the road on top of a small tree in a garden! There were 40 Greenfinches resting in trees but I suspect that the owl was after mice attracted to the bird food that was attracting the Greenfinches.

And some other sightings: