When one is trying to overcome an addiction there are two types of treatment. The most brutal is cold turkey and is perhaps the most effective but there is a less harsh alternative. One can swap the hard stuff for something softer and then reduce the daily dose until one manages to wean oneself off. It has been suggested that I should swap my Hawk Owls for Gulls, with Gulls even being described as a “medicine” but I see this just as the words of a persuasive dealer. I’m sure that I will be offered a free Iceland Gull but then soon I’ll be trawling the docks for Caspian Gulls or even hybrids. I am strong enough to avoid that stuff!
What I need, is to swap the Owls for something small and colourful that I can find more easily and enjoy in larger quantities but which will be easier to stop with over time. Something like Pine Grosbeaks and I know exactly where to find them!
I took it upon myself to stop Rune following me down the Hawk Owl high so took him with me to trawl Maridalen today looking for our soft Grosbeak high. My usual dealer was not hanging out in his usual place at Hauger so we drove slowly around looking for more. At Sandermosen we found what we were looking for. Sitting on top of a spruce having a preen were four males and a female Pine Grosbeak. I really don’t know if they are less addictive!
Although, as usual, the tree was high and the lighting poor (it was also snowing) they showed themselves off and also called softly occasionally. It is strange that this group of five contained four adult males whereas the group of 11 in Oppland didn’t contain a single adult (red) male. 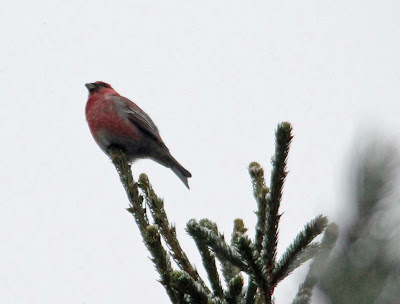 Rune got his high but looked to be in control of himself and had to return to work. I however had more time. I tried to find the Grey-headed Woodpecker at the feeding station but without luck although a rare winter Chaffinch was a good find. I did need another hit though so went back to Hauger and, what do you know, they were back. This time a flock of 17. They also called only occasionally but moved from tree to tree every couple of minutes. Given how thorough they seem to be in each tree there can’t be much food left for them in this particular area. The whole flock moved together and I have two pictures of tree tops which contain all 17 birds but if you can only see a couple of them if you are lucky – as I have said before they are an incredibly unobtrusive bird!


Some other photo opportunities presented themselves today: