After dropping the kids off I was straight off to Østensjøvannet to try for the Spotted Crake. I knew that it had been singing at night in a very small marsh and had been heard at very close range so I was hopeful that it would show in daylight.
When I got there I walked onto the boardwalk over the marsh and a small bird flew up from under the boardwalk and into the sedge grass - surely the crake. A family of Magpies was in willows growing in the marsh and were probably threatening for the crake but soon after they had moved on I saw some movement in the sedge and with a bit of encouragement it began to sing and show very well at just a few metres range.
It proved however very hard to photograph as it rarely sat still in the open long enough and the autofocus really struggled with all the leaf stems. However I did manage a couple of decent photos and also some video. In the video you can see and hear it singing during which it bobs its body up and down. It was really a privilege to see such a skulking bird engaging in its display which surely few people have been lucky enough to see. The marsh is right by a road and a path and in the video you can see the marsh and boardwalk and hear the cars going by - quite incredible that such a bird has chosen to hang around in such a place!

A young House Sparrow gave me some company and I snapped off these 2 pictures: 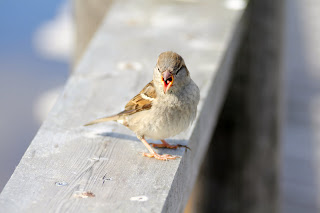 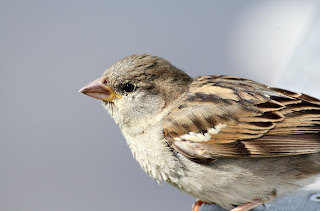