As I have already written in my last post I checked out the Bean Goose staging grounds last Wednesday without (unsurprisingly) finding any. I relayed this news to the team in Scotland along with my prediction that no geese would turn up for a couple of weeks. I was therefore surprised to receive a very excited email from Larry on Saturday to say that the last functioning GPS sender which had been offline for a couple of weeks had spring into life again and was in Norway! The bird had left Denmark on March 1st and flown over night to arrive in Norway around noon on the 2nd. I was unable to resist the urge and set the alarm for 6am on Sunday with the aim of getting up there at dawn to be able to see the birds leaving their roost on the river. The weather was awful with rain and temperatures of zero celsius causing very icy roads and difficult viewing conditions. There were lots of Whooper Swans on the river and I saw three very distant anser geese but couldn’t say for sure if they were Taiga Beans.

I felt quite sure that the geese wouldn’t hang around and would head south for better conditions but the tagged goose was still present yesterday so I decided to go up again today with Anders. It was snowing lightly, and the fields looked even less appealing for geese. When we arrived at the river there were only a handful of swans and no geese at all but I then saw some geese on a very distant field. We could see at least 52 and they sure looked like Taiga Beans but we needed to get closer. We had a bit of a drive then a long hike over a snow covered field before we were able to view them. As is often the case they were on an undulating field and we could not see the whole flock. We counted 101 birds but there were clearly more birds on the other side of a bump in the field as we saw birds including one with a collar walking over the bump and never coming back and I think that the initial 52 we saw may have been on the other side of the bump so there were potentially 150 birds there. The field not was not the usual stubble but had fresh green shoots planted last autumn. They were also very close to a farm and this was clearly the only available feeding area for them. I will make another prediction that they will move off shortly as the cold spell kicks in…

The only other species amongst them was a single Pink-foot. We saw a 10 ringed/collared birds of which we read 8 with certainty and some of them are birds I first read 7 years ago in March 2012 when we first made the discovery that the Scottish birds were staging in Norway.

We moved on into Aurskog Høland but the day was fairly birdless with nothing moving and most areas devoid of any birds at all but we did come across a good congregation in one area with around 150 Skylarks, 60 Redpolls, at least one Arctic Redpoll, 2 Snow Buntings, a Lapwing and 200 Hooded Crows contained a locally very rare Rook. We had a couple of flocks of Whooper Swans a few Canada and Greylag geese but many, many more will come when the thaw starts. Zero raptors and just a single Great Grey Shrike.

The only dabbling duck other than Mallards was a male Pintail x Mallard hybrid. It was with a couple of Mallards and they were very wary but it had the same feather damage on its breast as the Oslo bird and we also saw it was ringed which confirmed it was the same bird as that bird received the dubious honour of being blinged a few days ago. 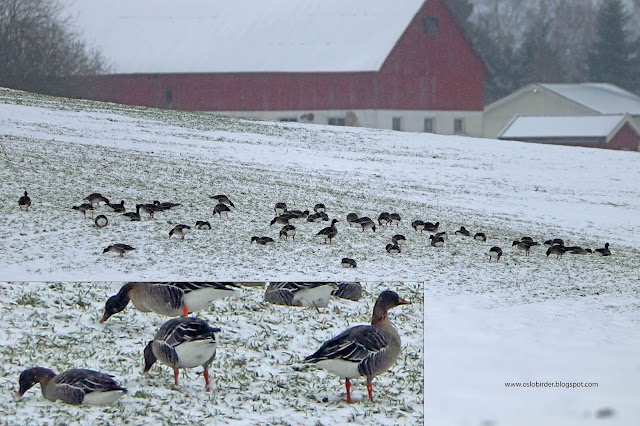