Everything must happen for a reason. I started early today with the aim of getting to the Elverum area around 6am. On the way, first there were roadworks which delayed me for 10 minutes and I then had to fill up with oil after the warning light came on delaying me further. I was therefore not at the Ortolan Bunting (hortulan) site until closer to 7am. It took a while until I heard one singing distantly (there were possibly two) and I moved closer to where it was. I came very close to the singing bird and pressed the trigger to take what would have been a frame-filler in perfect light. Nothing happened! I pressed again. Nothing happened. The camera was somehow on the delayed timer and was counting down from 10 seconds! By the time I had fixed that the bird had moved further away. I was still able to get some pretty decent pictures but not as good as they could have been. 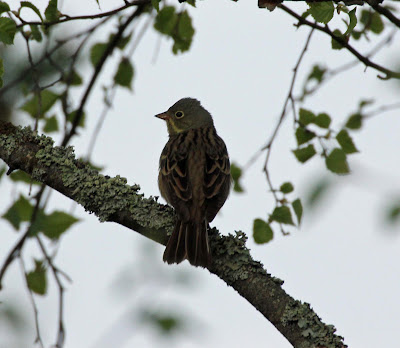 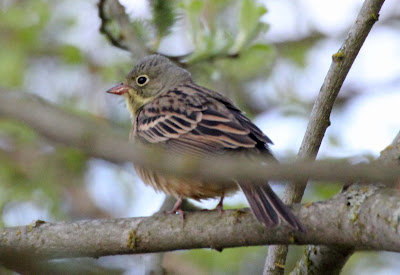 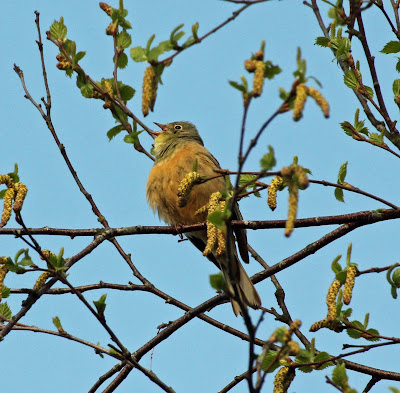 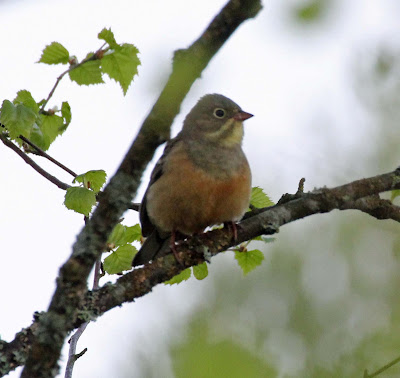 I’m sure this was for a reason though because just as I was turning to leave I noticed a raptor being chased by a crow. It looked small and through the bins at around 400m my first impression was of a Kestrel due to size, jizz and a redness in the plumage. But hang on wasn’t that a white rump and isn’t it actually bigger than the crow? It was a ringtail harrier but what sort? Due to the size and jizz I was sure this was not a Hen Harrier (myrhauk) and as it flew closer to me, but never coming closer than 200m, I decided to concentrate on taking pictures. I had the bird in view for no more than 2 minutes before trees obscured my view and it flew fairly directly but at a low height that made me think that it was in hunting mode rather than migrating. Well the pictures won’t win any prizes, but show it to be a PALLID HARRIER (STEPPEHAUK)! The slight red tone to the underparts ages it as a 2k (1st summer) and I reckon due to its dainty size it was a male but the pictures are not good enough to see if there is any plumage characters to back that up. So if all the annoying delays had not happened then I would not have seen it. The bird can be identified as either Pallid or Montagu’s (enghauk) rather than Hen Harrier due to it only having 4 long primary fingers (5 in Hen). Identification as Pallid is due to the pale collar and dark boa giving the distinct look plus it also lacks a dark border to the rear edge of the primaries which a Montagu’s should have. 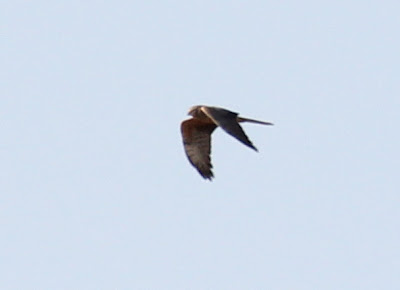 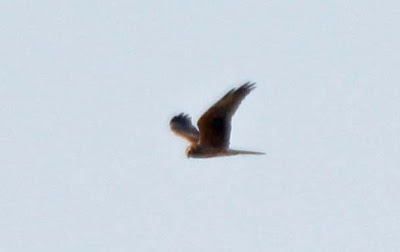 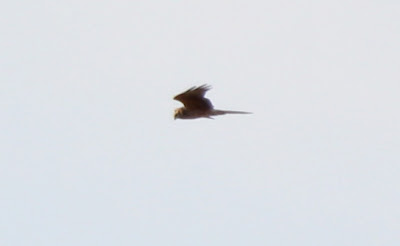 Thoroughly happy with things so far I now had a choice to drive a further hour into the forests of Hedmark to look for Rustic Bunting (vierspurv) which like Ortolan is down to a handful of pairs in Norway and is species that I have still to see, or to head for the wetlands around Hamar. I chose the later and it would appear to have been a good choice.
First port of call was Starene which I had visited for the first time on 16 April when there was flooding there and many many hundreds of waterfowl. The flooding was gone now and there were very few birds but there is still some standing water and yesterday a Red-necked Phalarope (svømmesnipe) had been seen here. I met a couple of birders who had just found a male Mandarin (mandarinand). OK, it’s probably plastic but they all count for the year list! They had seen a Temminck’s Stint (temmincksnipe) on a small pond and showed me where to go. When I got there I could see a few Greenshank (gluttnsipe) and Wood Sandpipers (grønnstilk) but nothing smaller. Then 2 small waders flew around. One gave the call of a Temminck’s Stint and landed close by and the other made another unfamiliar call but didn’t land and proceeded to fly around with a Greenshank before circling the pool a couple of times giving what I can only assume was a subdued display song. It then landed and lo-and-behold it was a BROAD-BILLED SANDPIPER (fjellmyrløper) – what a great bird and what a great Norwegian name. It fed amongst the grass on the edge of the pool and I was able to call the other 2 birders such that they saw it but it soon took off again with three Greenshank, circled a few times calling but then headed off low to the east.

I next set course for Hamar and Åkersvika and it wasn’t even 10.30am! Driving past a ploughed field I thought I saw something familiar - a pair of Dotterel (boltit)!

At Åkersvika there was quite a bit of mud and this of course attracted waders. In total I had 18 Temminck’s Stints, 12 Dunlin (myrsnipe), 13 Ruff (brushane) with just one male, 7 Ringed Plover (sandlo), 1 Little Ringed Plover (dverglo) plus a few of the more usual suspects. Few ducks, but a pair of Scaup (bergand) were good value.
Deciding to head back towards Oslo I popped in at Snekkervika, Nordre Øyeren, hoping to find some of the summer migrants that I have still to see. I succeeded in hearing one of my targets, a singing Sedge Warbler (sivsanger) but will have to wait to see Rosefinch (rosenfink) and Red-backed Shrike (tornskate).
Whilst watching an agitated Common Whitethroat (tornsanger), I noticed an agitated Whinchat (buskskvett) beside it and then noticed what was annoying them. A head sticking out of the grass – the head of a Corncrake (åkerrikse)!!!!!!! It stood in the same place long enough for me to take some pictures and then popped its headed down, sang once, and was gone. How lucky was I being today??!

Time for a quick trip to Maridalen before having to pick the kids up and a distant raptor with downcurved wings, narrow, long head and long tail was undoubtedly a Honey Buzzard. Also in the air a Kestrel and a Common Buzzard which was missing a number of flight feathers. The Wryneck was peeping out of its hole but no Rosefinches or Shrikes here either.
I ‘ve had a few good days this spring but this might just be the best of them!
Lagt inn av rixy kl. 21:45