Today was cold but sunny so I thought I would see if I could get some better pictures of Oslo’s scarce gulls.
The Glaucous Gull decided to hang around with the drug pushers on the shady side of the river and didn’t even move on when the police came – a real tough brute. Not even the police managed to move him on. Finally he took to the wing but not to visit me and my bread but instead to land on the ice. I managed some pictures but not as close as I had hoped.

This portrait of Herring Gull was supposed to have been of the brute himself.
The Med Gull initially didn’t want to join in with the Common Gulls that came to my bread and only did a couple of fly pasts. Then an old lady walked across the park and all the gulls left me and were joined by tens more such that around 120 gulls were flying expectantly over this woman. I went over to her and she explained that she regularly fed the birds here with bread and cat food! The birds obviously liked what she had and were also not scared at all and landed very close (just shows what clever birds gulls are). The Med Gull also got in on the action but at times it was difficult to keep track of where it was. 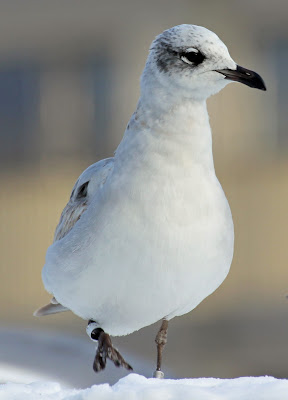 I did not manage to bump into the Eagle Owl which Per Christian was lucky enough to a couple of days ago as he went to his car after work at 5pm. He noticed a huge swarm of angry crows venting their anger on something which turned out to be an Eagle Owl. Obviously you just need to be in the right place at the right time at dusk and listen out for hundreds of crows!
Lagt inn av rixy kl. 20:58