A truly memorable day. Blue sky, no wind, great light and only a couple of degrees minus. Some good birds too. After a weekend spent in London on a stag party I needed to get out to clear the cobwebs. Intrigued by a report of 7 Purple Sandpipers yesterday I chose Kurefjorden as my destination. I was surprised by the extent of the ice with most of Kurefjorden but also much of the Oslofjord covered in ice. It is the lack of wind recently rather than extreme cold that has allowed this salt water to freeze over.
Arriving at the Larkollen side of the fjord mouth by the peninsula called Denmark I soon had the Purple Sands in the scope on a small rocky island that was surrounded by open water. I then scanned the small areas of open water hoping for some exciting divers, ducks or grebes but had to be content with a handful of Great Crested Grebes, Common and Velvet Scoters. Looking towards the Oslofjord and the Sletter islands I noticed that there were birds moving: auks, Goldeneyes, Great crested Grebes and Velvet Scoters. These were birds presumably moving due to the fjord icing over. Also a flock of 96 Common Scoters on the sea was way larger than any other flock I have seen this winter. There were also 5 Guillemots on the open water and these were at times calling loudly and frequently to each other. I picked up only 3 Rough-legged Buzzards in my first scan of the islands and then had a smaller raptor flying low and away from me which turned out to be a female Sparrowhawk. This first perched on Mellom Sletter island before heading for Store Sletter. I followed it in the scope and was amazed to see it put up a flock of waders as it reached the beach at Store Sletter.  The flock split in two with 60 heading south and 40 heading out of sight behind Store Sletter. There was a larger bird with the southbound flock which turned out to be a Grey Plover and the other birds were most likely Dunlin based on their size and how they flew as a flock although I struggled to note much in the way of plumage (I realise though that I cannot discount Purple Sandpiper due to the range so I have reported these as calidris sp). Either way this is a very exceptional record. There have been a few waders in the Oslo fjord recently including a couple of Knot but such high numbers (and possibly three separate species) is extreme. I can only think that these are birds that have been displaced by the freezing conditions in Denmark or Germany and have somehow headed north and then been funnelled up the Oslofjord. The flat Sletter Islands which were surrounded by open water were presumably one of very few suitable places for them to land although I cannot see them hanging around as food must be very scarce.
I kept scanning the islands but failed to see them again. I did get much better views of the Purple Sandpipers on their rock and then picked out a distant White-tailed Eagle perched on Søndre Sletter. This disappeared after 10 minutes although I assume it just dropped down the back side of the island. Twenty minutes later a 1st winter White Tailed Eagle flew from behind me towards Store Sletter and put up six Rough-legged Buzzards giving me 9 in total. I am certain that this eagle was a new bird as I cannot see how the other bird could have flown from its island without me seeing it.
Also 2 common seals in the water.

Heading for Brentetangen to see if there was any birds moving I was very surprised to see that the fjord was over 90% frozen with 8 seals sitting on the ice as though we were in the arctic. There was some open water close to Brentetangen and this held 46 Guillemots, 6 Razorbills and a few ducks . There were also a few Guillemots sitting or standing on the ice looking very lost.

My last port of call was Moss where I hoped the harbour may hold some interesting gulls. Unfortunately I could not find anything among the couple of hundred Herring Gulls other than a few Great Black-backs and Black-headed Gulls but the ducks were more interesting. 570 Mallard, 210 Tufted and 10 Goldeneyes held a male Gadwall in their midst as well as 3 Coot.
On the drive back I had 2 Great Grey Shrikes by the motorway (the birds that hang out either side of Vestby) one of which I had also seen on the way down. 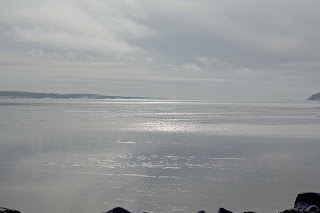 All in all a very enjoyable day with the icing over of the Oslo fjord causing some exciting concentrations of birds.
Lagt inn av rixy kl. 22:28