The winds were just right today and there was little rain forecast and temperatures were around 5C. In other words prefect for yet another seawatch (and probably the last of the year). I wasn't able to get out to Rolftstangen, Fornebu until 11am by which time I had received a message of a Pomarine Skua there. Fortunately it was still visible when I arrived and remained so until 3pm when I left. It had killed a Common Gull which it regularly returned to feed on just 20m away from where we were standing and gave outstanding views - very exciting stuff. The bird was definitely immature although I am not sure whether it was juvenile (1K) as it had noticeably longer central tail feathers which may be a sign of it being a year older. We also had another Pom Skua at some distance which brought down a gull (possibly a Herring Gull) which it sat on and appeared to succesfully kill and then feed on.
Otherwise there were very good numbers of Kittiwakes with at least 50 and many coming very close and also at least 10 Fulmars which also frequently gave excellent views. I have still to take a decent picture of a Fulmar and today was no exception. I got frame filling views but could not get the exposure right - something to keep practicing. One Fulmar was also noticeably dark but would probably be classified as an intermediate morph rather than a dark morph.
Few auks to see although we did have Razorbill, Guillemot and Little Auk. No Black-headed Gulls and very few Common Gulls remaining but a single immature Little Gull was a nice find.
Rarest bird of the day (although not highlight which definitely belongs to the Pom Skua) was a Grey Phalarope which I saw but unfortunately so briefly that my 2 fellow observers did not get on to it. The bird was in flight on the Bygdøy side of the fjord at Huk and landed which was when I lost it. The identification as a phalarope was easy enough but the specific identification as Grey was based on time of the year (Red-necked's being unheard of so late).
Later in the day a probable Leach's Petrel was also called by another observer but was lost from view. This is the only seabird that I have missed in the Oslo fjord this autumn and it now feels like I have run out of opportunities but I can be happy with everything else I've seen. 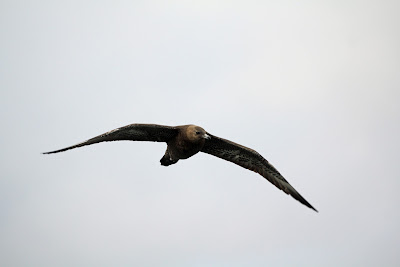 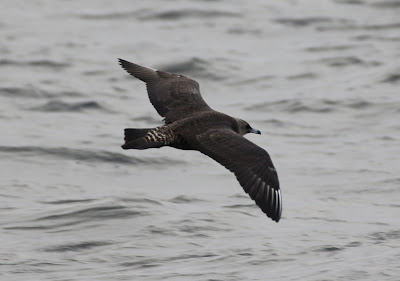 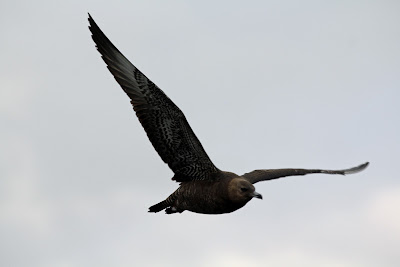 A very short video of the skua tucking into lunch. You can see it having to flap its wings to deal with the wind.