With Christmas fast approaching and a long list of presents to buy not getting any shorter much of this weekend has not been spent outside enjoying lovely frosty winter weather. Today however we had a short walk in Maridalen in the middle of the day. It is not that cold – just a couple of degrees into the blue but there must be a lot of moisture in the air because it feels much colder and there is a very think frost covering everything. Despite it being cold there is no snow and none is forecast in the immediate future but with no wind there was some ice forming on Maridalsvannet.


We did not see the GG Shrike but it is still there as others are seeing it but it is clearly having to wander more widely to find food than it needed to previously. The Whooper Swan family was feeding on a frosty stubble field though and will most likely stay here until snow and/or a frozen lake push them on. An additional couple of Whooper Swans were out on the lake and these could have come from much further north.


The light today was very special as you will see in the photos. When the sun was behind a cloud everything looked black and white but when the sun was out and behind you then there were lovely warm colours against a blue sky.


There are still the occasional reports of Great Grey and Hawk Owls in Southern Norway and though obviously there is no large invasion underway there are clearly enough birds on the move that I still have hopes of turning one up. 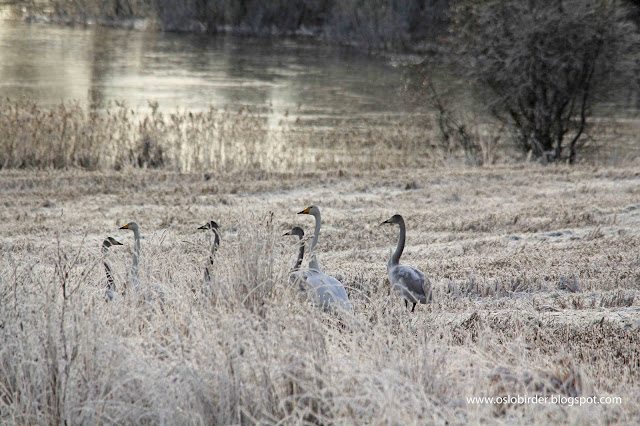 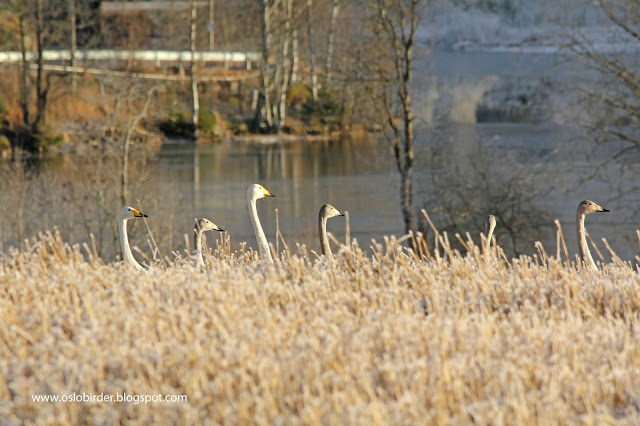