As forecast storm force winds hit the Oslo Fjord. Unfortunately there was too much west and not enough south in the wind for there to be too much action close to Oslo but there were birds. Reports from Saturday made it clear that it was going to be auks and Kittiwakes that would be the commonest birds with perhaps a skua or two to look for. Lots of auks can be exciting though and it was these I decided to spend time on. Trouble though is that separating Guillemots and Razorbills in flight is difficult enough especially when they are speeding by with a tail wind up their arses. The day started with streams of auks heading fast north with at least 700 birds noted in flocks of upto 30. When going north I only really had a chance of separating Little Auks out due to speed, range and light.


As the morning wore on the winds ebbed and the birds started heading south a lot more slowly and in better light (after 700 going north I counted 550 going south). Suddenly I was picking out Puffins! I had 4 birds heading south and 1 north all in the course of 50 minutes. I was now checking every auk and my hope was to find a Brunnich’s but to be honest I do not have the (super natural?) powers to take one for certain in flight at 1km range which is where most of the auks were (the middle of the fjord). However I did have a very good candidate with a dark head and seemingly more compact jizz than the Common Guillemots it was with but that wasn’t enough. How about trying to find one sat on the sea? A number of the auks were splashing down so I started scanning and 5 minutes later and what do you know? Alongide a flock of 5 winter plumage Common Guillemots was a bird that was much blacker and with nearly a completely dark head. This needed grilling as I needed to see more and be certain it wasn’t a Common Guillemot in summer plumage. I wasn’t able to see the white line over the bill at such range but I could see that the bill was shorter than the Common G’s, the head was a squarer shape and the white on the chest went up in a V into the black. Enough, for me at least, to be happy that this was a Brunnick's Guillemot (polaromvi) and a good bird (less than annual) in these parts.


My pictures from today are absolutely pants and don’t even fall into the record shot category. 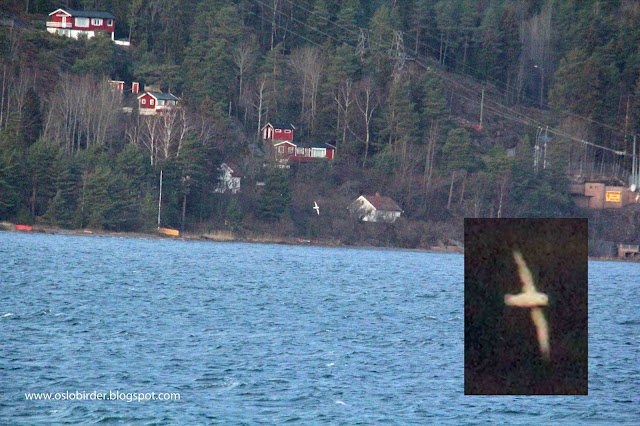 And to finish off the post an absolutely crap and completely non conclusive video of the Brunnich's:

This is the best snap shot I've managed to take from the video. You possibly get an idea of what the bird looked like... 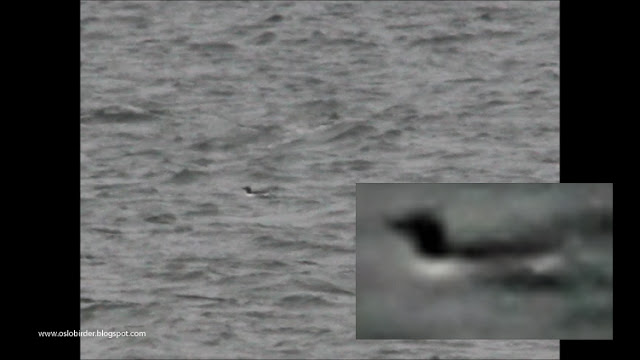