I awoke early and with some slight rain forecast I thought a trip to Årnestangen would be a good idea. When showers are forecast at the moment that usually means either it will be sunny or biblical scale flooding. Today it was the latter which was combined with lightening and I did start to feel exposed and vulnerable standing next to my metal tripod.

On the walk out I had Hen Harrier and Marsh Harrier which were also still present 4 hours later on the way back. Both were adult (or near adult) females. Raptors were the highlight of the day with Kestrel, Buzzard and 3 Peregrines also noted. The Peregrines were busy scaring off all the waders when I arrived at the viewing platform and are a real menace in the autumn. I had one juvenile trying its hand at anything that moved: first Lesser Black-backed Gulls before singling out a Ringed Plover which it chased unsuccessfully for a long time. Then one of the adults (probably mum based on size difference) turned up with a wader in her talons and gave the youngster a hunting lesson. The youngster chased her screaming for the food and mum performed all manner of aerial pursuits allowing the youngster to nearly take the prey on a number of occasions before powering off. After a while another larger juvenile joined them and there was a lot of noise from some trees where they later landed out of sight and I imagine tht one of the youngsters was given the prey.

Waders were much less numerous and diverse than last week with only 14 species versus the exceptional 23 but I did have two new ones: Golden Plover and Lapwing plus Ruff numbers were higher. Rarest birds of the day were two juvenile Little Gulls that have been present for a few days now.

A stop in Maridalen revealed three young Shrikes along with dad. He will move off soon and leave them to their own devices. A feeding male Common Rosefinch was a rare autumn sighting of a species that seems to vanish once the males stop singing. Highlight though was what I think may be a behavioural first for me namely a perched Honey Buzzard. I can never remember having seen this species perched before and although the views were poor as it was drizzling and distant I was able to enjoy it. I later saw her flying low over treetops staring downwards. They hunt by following wasps back to their nest and digging out the nest which must be a very time consuming activity although presumably rewarding if the nest is large. This year though there just do not seem to be any wasps around so I imagine they are having a really hard time. I also had a Blyth’s Reed Warbler which was calling loudly from among some raspberry plants and eventually showed briefly. 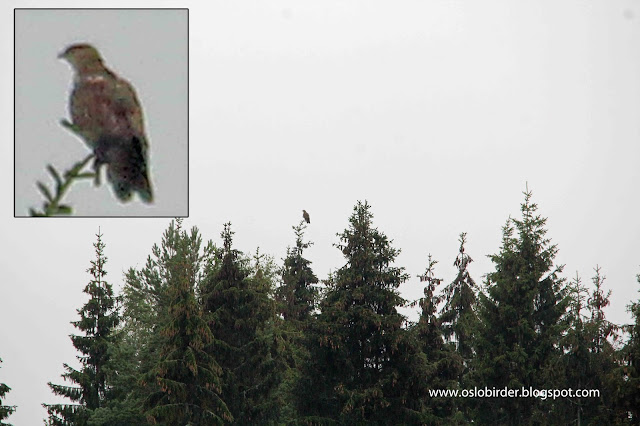