Having, on Saturday, received evidence via SMS of the continued existence of the mythical Three-toed Woodpecker I summoned my energies for one last attempt to see this bird. Destination was Sørkedalen where I had also searched for this species less than 2 weeks ago. Parking at Skansebakken car park I headed off into the forest armed with bins, camera and loudspeaker for the iphone – I was determined to be successful no matter what!
The forest definitely looks good with many large spruces and much dead wood but haven’t I thought the same many times before? A flock of 6 Long-tailed Tits was as always a nice sight but otherwise the forest was quiet. A few Bullfinches made their presence known and a Great Grey Shrike sat in a clearing (my 13th sighting this autumn) but neither sight nor sound of woodpeckers of any description. Out with the phone and loudspeaker and I played bursts of 3-toe call and drumming. After 3 km of walking (although only 1km from the car as the 3-toe flies) I played the recording and heard the sound of a bird flying towards me. Nothing to see at first but then YES!!! A THREE-TOED WOODPECKER. By the lack of yellow on the head this was a female although it did very briefly drum (according to BWP both sexes do drum). It was quite misty and dark so I didn’t manage any good photos but I was able to enjoy the bird for a couple of minutes before it flew off. It did call in response to provocation but otherwise was entirely silent with no tapping sounds heard as it fed. I am quite sure that I would not have been lucky without using sound provocation – no wonder I have not been lucky before. I will have to return in the spring to see if I can localise some drumming birds. 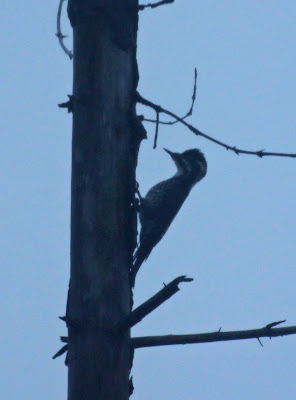 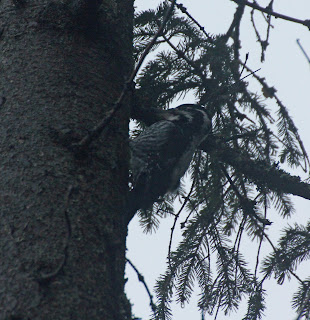