The rain stopped today and I had a guiding outing to Årnestangen to look at waders. The rain has caused water levels to rise around 30cm and there was a lot less mud. There was also mist when we arrived and when this lifted it was glaring sunshine and heat haze! There was still a good variety of birds to see though although as expected not as much as earlier in the week when it was raining. Barwit, Knot and Grey Plover were today's highlights. I hoped that the sunshine would cause some raptor activity but apart from a lot of Ospreys and a couple of distant Buzzards it was all rather disappointing.

A quick trip into Maridalen provided the undoubted highlight of the day with a flyby Kingfisher which stopped on a branch long enough for a few pictures before disappearing down the river. It was a juvenile and probably comes from Sandvika although there are most likely other undetected pairs breeding within 50km of Oslo. 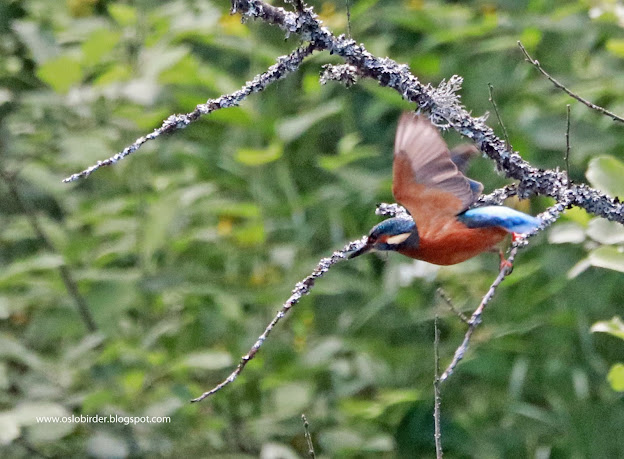 Email ThisBlogThis!Share to TwitterShare to FacebookShare to Pinterest
Etiketter: Greenfinch