So, the last 2 days I have been guiding a group of Chinese bird photographers. It has been fun but was definitely a new experience for me. We visited Østensjøvannet yesterday where we had lots of photogenic birds and then the magical forests of Hedmark today where there were fewer birds but they were most definitely magical and also exceptionally photogenic. The main reason for going to Hedmark was of course the Great Grey Owl. When we arrived at my favoured nest I had a real shock as the nest had partially collapsed and was empty of birds!! I approached and an adult flew up from the ground under the nest and landed unseen in trees close by. Another few steps and repeated bill snapping told me that it would be wise to stop and retreat. We approached the area where the bird had landed from the other side such that the nest was behind the bird and we were therefore no threat. This allowed us to locate the bird and have quite amazing views.

I felt I needed to determine what had happened to the young in the nest - the adults behaviour suggested there were young on the ground and I could hear something calling there. I therefore decided to approach with the tripod and telescope held above me as a shield. When I got quite close I heard the youngster calling but then heard a lot of bill snapping. I managed to locate the youngster and document it whilst continuously looking towards the adult (who I couldn't actually see)...which was suddenly coming in for attack. If only I had a head mounted GoPro then I could show you the bird flying straight at my head as I fell to the floor. I beat a hasty retreat as it glared and snapped at me from a nearby tree top.
It was now even more photogenic and the sound of camera clicks filled the forest air. I was asked (seriously) if I would go back towards the nest so they could get flight shots.... I politely declined and explained quite how aggressive they could be, i.e. eye losing aggressive. Eventually of course the bird flew of its own initiative (it returned to watch over its young) and those with their cameras ready (not me of course) got the requested shots.
The single youngster I located had a bloody wound on its back and what looked like insects on it. With the presence of the protective adult I was unable to do anything (if anything can be done) but have contacted someone who will visit the nest and may be able to do something such as put up a platform and place the youngster on it (whilst wearing a motorcycle helmet and thick leather jacket). It might seem strange that an old Buzzards nest would fall down but this nest has been in use by GG Owls since at least 2014 so has not been added to or repaired in any way since at least then. It is of course a shame for the owls and especially the youngster(s) which will almost certainly perish but is also a shame for me that I am losing such an accessible nest although a platform here may do the trick...

After enjoying these birds, it was Slavonian Grebes that were next on the agenda with a roadside Red-backed Shrike good click bait. The first (my usual) stop for the grebe did not produce a bird that was sufficiently close for the photographers (30m was too far...) so we drove to another site where no one could complain (I even took the camera out..).

After this we visited Elverum’s only chinese restaurant where a lot of talking in chinese with the cook ensured that "proper" chinese food was served.

Last photo stop of the day was Hawk Owl. We went to the nest site where I had not found anything on my last visit so I had been very cautious about promising anything. When we got out of the car though I immediately heard the hissing sound of a begging baby owl. And then first two and then a third male Capercaillie flew up and over the clearing but before anyone was ready with their camera. We then went carefully to investigate the owls and had 5 youngsters, 1 or possibly both adults and witnessed an adult bringing a large vole to feed one of the youngsters some of which were already good flyers. It is a bit of a mystery to me what happened last week when there were no adults to be seen and no sight nor sound of the young in the nest hole.

The only raptors today were single Rough-legged Buzzard and Kestrel so once again, and very strangely, owls outnumbered BOPs.

I need to have an early night as I am up early guiding tomorrow so haven't had time to go through all the video and stills I took today. There will doubtless be a follow up post later in the summer but here a few hastily chosen pictures to give a feel of the magic. 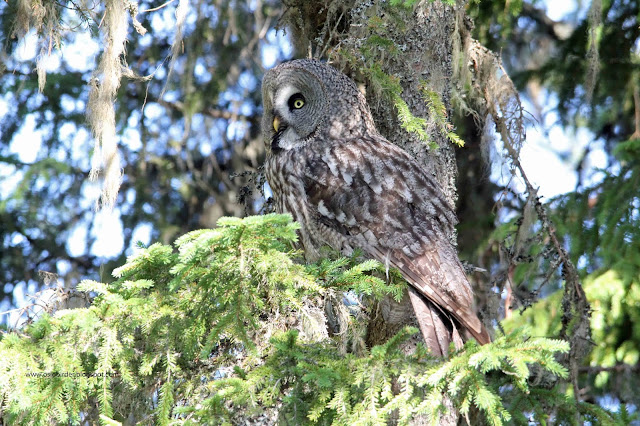