Temperatures fell to 26C today from as much as 32C at the weekend but it hardly felt any more comfortable. I gave Maridalen a good going over and checked up on breeding birds. The River Warbler was still present as were a couple of singing Marsh Warblers and Common Rosefinches (I also briefly heard a possible Blyth’s Reed that will need some nocturnal following up). A couple of Black Woodpecker young will soon be leaving the nest and Great Spotted Woodpecker young were making a lot of noise in one best whereas at other sites the breeding did not seem to have come so far. The Three-toed Woodpeckers are however not to be found anymore. The Whooper Swans are still on eggs but these will hatch very soon. One of the two pairs of Goshawks seems to have hatched young in the nest whilst the other pair has failed for the second year running. The Buzzards are still present although I do not know where their nest is. Hobby and Honey Buzzard are still to turn up although will I suspect appear later in the summer.

In the garden four Great Tits left the nest this morning and a couple of fledgling Robins are being fed in the garden.

There were lots of dragonflies and damselflies to see today although fewer butterflies. Beautiful Demoiselle was a nice addition to the year list and Small Pearl Bordered Fritillaries and Large Skippers were widespread.

A real highlight was seeing a swimming Grass Snake. I also thought I had taken some great close up photos of it but see that my camera (the bazooka) is really playing up on me and needs to be replaced pronto. I have had problems with power which are not the battery (as it happens with both the batteries I use) but today I took photos which just didn’t get recorded to the memory card and then the cameras own sequence of numbering also got screwed and it forgot it had taken some photos that did in fact get recorded to the card. At one point the snake got alarmed (I think it smelt me) and then swam under water for about 10 metres which I was unaware they could do. 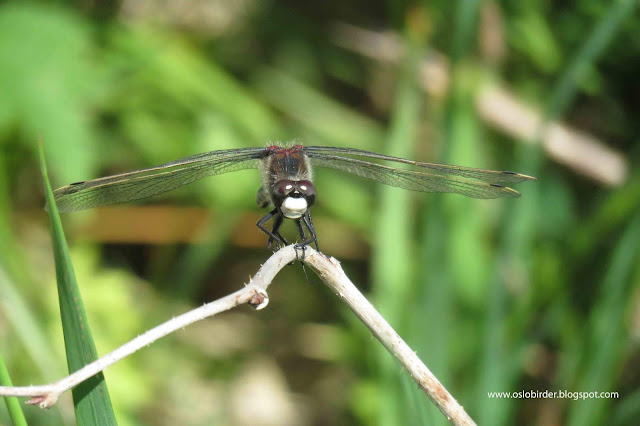