After sorting out the girls I set course for Fredrikstad where I was going to be refind the 2BC and get some ultimate pictures (I’m not really sure why I can’t be happy with the ones I took on Værøy). Just as I was leaving Oslo I received a message from Per that he had been there half an hour without seeing it. Given that I had an hour and a half drive ahead of me I decided to turn around and instead headed for Fornebu. Per had to wait until 11am until he found the 2BC (båndkorsnebb) but was then able to admire it and a couple of Common Crossbills (grankorsnebb) at a range of 2 metres! Although scientists say it is nonsense it does appear that birds get “drunk” on old berries as they appear to be far more approachable than when feeding elsewhere.

Fornebu though wasn’t a complete disappointment. It was calm and sunny and even warm at times. As I walked towards the reedbed at Storøykilen I saw Kjetil Johannessen standing there taking pictures and was pretty sure I knew of what. Indeed the Bearded Tits (skjeggmeis) were back and this time being very cooperative without any form of encouragement.

Two pairs were feeding on seed heads very close to the path and making a lot of noise. Some great pictures ensured and with a little encouragement they perched perfectly. The fact that they were making a lot of noise suggests to me that they were new birds and after 15 minutes they took off and gained some height before heading off although it didn’t appear they were going that far. I then found a single female close by and she too was calling frequently and flying around the reedbed looking restless. When I returned to the reedbed an hour later the four birds were back but soon took off again, flew around a few times calling and gaining height before this time heading off purposely NE (maybe they will turn up at Østensjøvannet?). Two of the birds, a male and the lone female were ringed but despite closish photos I can’t make out any details.

Three separate Water Rails (vannriske) called from the reedbeds in Storøykilen but none revelaed themselves and on the water there were at least two Little Grebes (dvergdykker) which spent most of the time hiding under the jetties of the sea plane club.

I grilled a small flock of Common Redpolls (Gråsisik) feeding in alders and twice thought I had found an Arctic (polarsisik) when from below I saw birds that appeared to have pure white undertail coverts. One bird did indeed have pure white feathers but was a Goldfinch! and the other on closer inspection had a single large black feather which was initially difficult to see. I heard a very clear trumpet call persistently from an area with spruce trees but was unable to find anything other than a trumpeting (eastern) Bullfinch and a couple of overflying Common Crossbills. I’m sure it won’t be long though before I turn up a local Arctic Redpoll or Two-barred Crossbill.

Observation of the day though was of a dragonfly. A Common Darter (rødbrun høstlibelle) Sympetrum striolatum would appear to be the latest record in Akershus (beating yesterdays observation of probably the same individual by Geoff Acklam!) and one of the latest ever in Norway. Its days must be numbered as there was ice on the puddles so I hope it was able to find a mate and do what dragonflies do – “slurp, slurp, flutter, flutter, shag, shag” according to a great sketch by Smith and Jones which I have tried to find on YouTube but have failed.

I have taken some pretty satisfying pictures of Bearded Tits before but today’s pictures are definitely a notch above the rest. The warm morning light was great – not too bright that it burnt the colours out but bright enough that I could set the lens at F9 which is its best aperture and with an ISO of 800 and shutter speed of 1/640sec I am pretty happy – in fact delighted – with the results.

Please excuse me posting so many pictures but each one shows something slightly different. 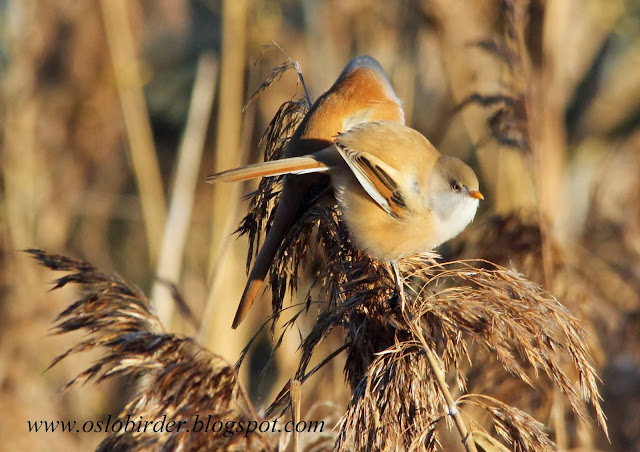 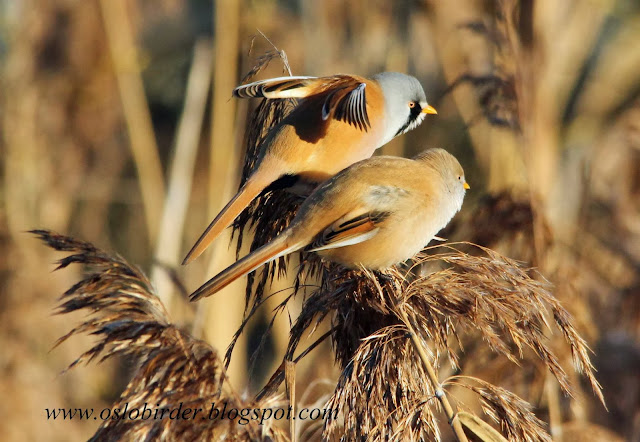 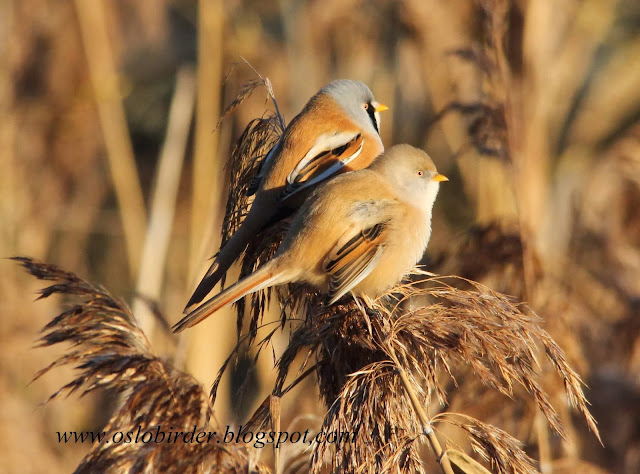 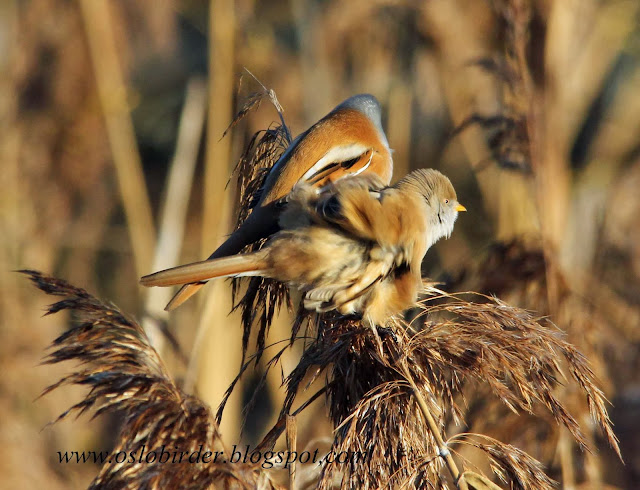 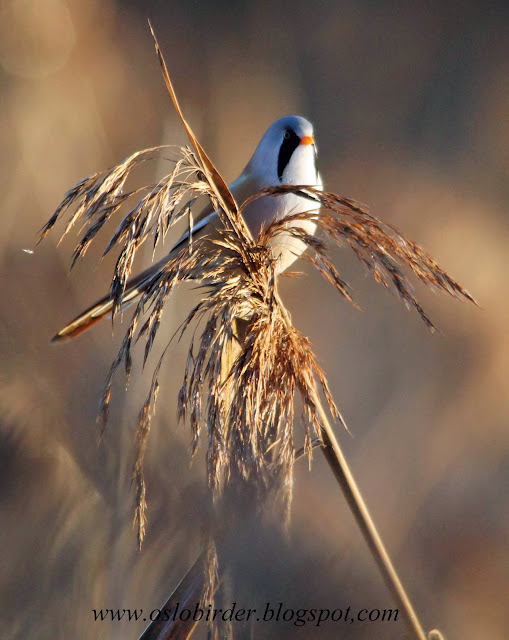 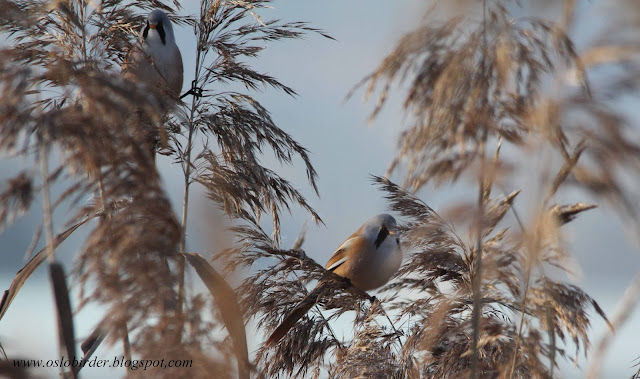