The day started at Fornebu in gorgeous sunlight and freezing temperatures. At about 10am though a warm front suddenly arrived (as forecast). I cannot remember ever experiencing anything similar: there was suddenly a fresh breeze and with it came warm air. I guess it went from -3C to +7C in the space of a minute.

Fornebu had a few good birds to offer but was relatively quiet otherwise. Five Bearded Tits (skjeggmeis) and five Hawfinches (kjernebiter) were the scarcest whilst the male Kestrel (tårnfalk) was the most photogenic and gave me my best ever pictures of the species. 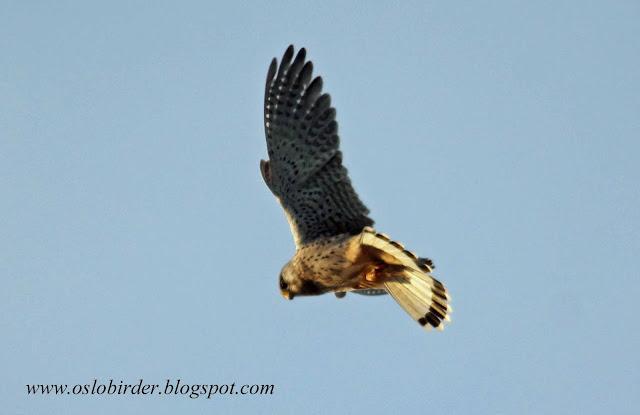 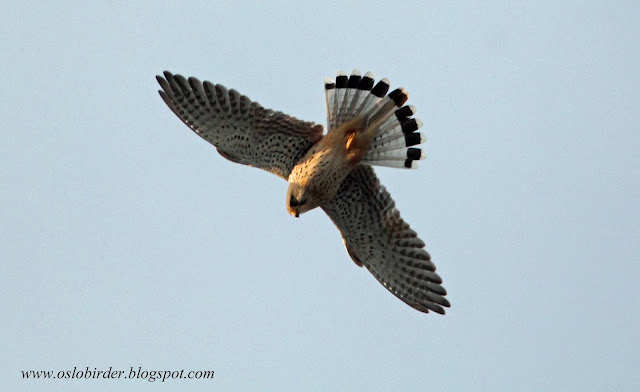 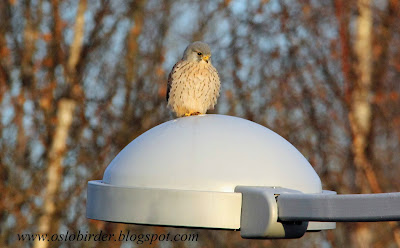 I was however feeling a call and made my way into town. I stopped at Kongshavn where there were few duck although alongside 30 Tufted Ducks (toppand) were the two Velvet Scoters (sjøorre). Interestingly whilst I was watching them diving they were visibly spooked by a large fish and both popped out of the water like a cork and flapped away.

For the third day running I made my way to the Botanical Gardens and the crossbills were performing in an exemplary fashion (this risks becoming my new addiction). They are not at all fussed by people and nearly landed at one person’s feet. I also had them feeding above me in the berry tree within the 2.2m focusing limit of my lens!

I know that I have bored the majority of the people who read this blog with my thoughts on aging and moult progression of these birds but I did notice one more interesting thing today. The greyer of the two females and the one that I have previously considered to be the youngest actually has come further in the moult of its tertials and has adult like tertials appearing whilst the other bird which has much greener (and therefore adult like) body feathers still has its juvenile tertials (see pictures below). Both would therefore appear to be 1st calendar year birds.

I succeeded in recording the calls today so now have a job to do in editing all the short video clips I have taken. Of course I took a few more (everything is relative) pictures of the 2BCs today and can’t resist publishing a few more. I have tried to focus on pictures showing their interesting feeding behaviour and exceptional dexterity. Note how they hold the berry stems in their feet whilst cutting through the flesh.