A very interesting report came in of 2 possible White-backed Woodpeckers in woodland on Bygdøy in Oslo yesterday and this morning another observor reported a definite individual there at dawn so I made a trip there at lunch. White-backed Woodpecker has one of its european strongholds in Norway but the birds are to be found mostly on the west coast and they are very rare in the east with the local breeding population having become extinct over 20 years ago.

When I got to the site there were immediately calling woodpeckers to be heard. In fact I have never encountered quite so many in such a small area. I had at least 12 individuals including on one occasion 5 birds calling within a 100m radius. Unfortunately all were Great Spotted though. One interesting bird was a juvenile still with the red head (a feature of White-backed). This appeared to be ill and was mucky on the underside giving the appearance of barring. It will be interesting to see if there are any more confirmed reports of the White-backed. Otherwise a Hawfinch and a couple of Bullfinches including this bird against a backdrop of autumn leaves. 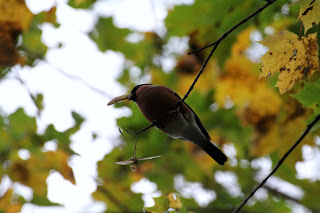 I had time for a 15 minute thrash of Fornebu and this time I got lucky with the RICHARD'S PIPIT which was a norwegian tick to boot. I first flushed a Skylark from an area of rough grass and then another bird which did not call but was clearly a pipit. When it joined the Skylark in flight its large size became apparent and it then began to call - a distinctive sparrow like cherping. That was pretty much all I had to go on but was enough to make the call. I did manage this photo though although I don't think it can count as even a record shot ;) 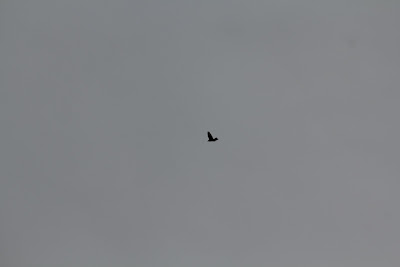