In rainy and overcast conditions on Saturday I cycled around Maridalen. Over 200 Greylag Geese were on the water along with 4 adult Black-throated Divers, a Cormorant and a Great Crested Grebe which is only my third record here. A couple of distant birds were Guillemots or Razorbills but they were too distant to identify with bins. Quite a few Swallows were sitting on wires and a Swift was a fairly late bird but otherwise they were few passerines to be seen although in the garden there had been 4 Blackcaps and a Nutcracker.

Riding back along Akerselva I saw a Goosander sitting with a group of Mallards. Back home in Sussex seeing a Goosander was a highlight usually occuring in the middle of winter and normally at long distance on a reservoir. Here in Oslo they are often to be seen on Akerselva and some birds like this one associate so closely with Mallards that it makes you think that they make have followed the wrong mother when they were a duckling and have an identity crisis. 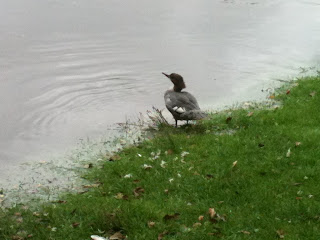 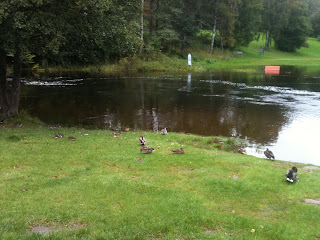 Email ThisBlogThis!Share to TwitterShare to FacebookShare to Pinterest
Etiketter: Goosander