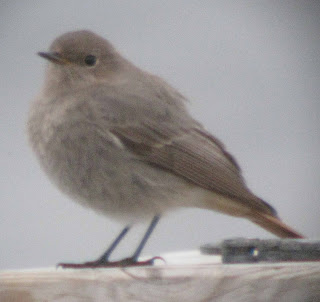 The day started in Maridalen but low cloud led to no signs of migrations. The only interest other than the omni present Hawfinches was a single Long Tailed Tit and 4 Lapwings looking rather forlorn standing on the snow. I only lasted 15 minutes before deciding it was best to head for the coast where the low cloud would be less of a problem. Fornebu it was then and first stop was Halden Brygge which gives good views over the fjord aswell as having some open areas where I hoped for my first White Wagtail of the year. I scanned the sea and small islands picking up Eider, Oystercather, 2 Common Scoter, 3 Lapwings amongst others. Whilst doing this I was aware of a passerine calling close by which I couldn't quite place. The bird soon caught my eye and without bins I thought maybe it was a very early Wheatear. But no it was a female BLACK REDSTART. This was not only a Norwegian tick for me but a pretty good bird in these parts. I texted out the news but the bird appeared to have moved on after 15 minutes and as far as I know noone else relocated it.

A nice flock of 14 Velvet Scoters was offshore with another 2 seen flying around and a flock of 20 Twite buzzed over and 2 Starlings looked freshly arrived.
Lagt inn av rixy kl. 18:07