Drove to Søndre Mangen in Aurskog-Høland, about an hour from Oslo. This is a large area of commercially managed woodland with a mixture of pine and spruce, many lakes and marshes. The most prominent birds of the day were crossbills with many 10's. The vast majority (>90%) were males which were often in groups and singing. Presumeably the females are already on eggs. Although I got really good views it was not an easy task deciding what species they were. The birds were mostly associated with pine which is normal for Parrot and the previous week another birder visited the area and reported large numbers of Parrot and no Common. However the ones I was able to view and have photographed appear to be Common (although if I was at Abernethy maybe I would have said Scottish!). These pictures were part of a group of over 10 males and just one female that were on the road where they appeared to be eating snow. 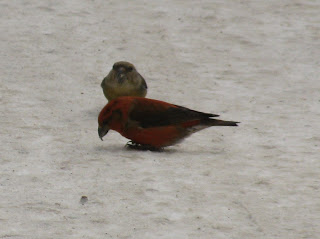 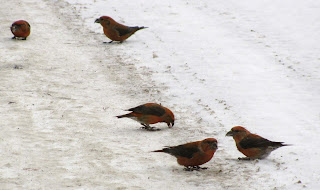 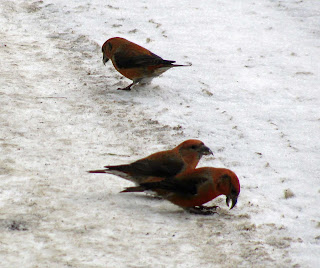 Also seen were a single Long Tailed Tit, Crested Tit, Goldcrest, a Black Woodpecker heard and 4 Elk and about 14 Roe Deer. 2 of the Elk and 13 of the Roe Deer were attracted to a hay bale and carrots put out for them: 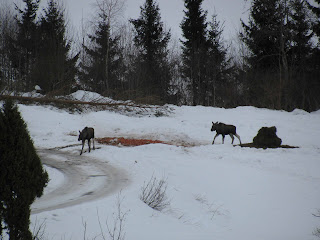 Snow is still very thick on the ground and rivers are still frozen. Consequently there were no migrants to be seen in the agricultural areas but they will be there soon.
Lagt inn av rixy kl. 22:43