Spent the weekend in Bodø just north of the Arctic Circle. Already there is more daylight here than in Oslo although there is as yet little warmth to be had from the sun. Bodø harbour was swimming in Eiders with one male King Eider plus a few Long Tailed Ducks.

Despite a number of gulls I couldn't locate any white winged versions. The Bodø area has one of the worlds highest densities of White Tailed Eagles and sure enough they were to be seen through out the weekend. 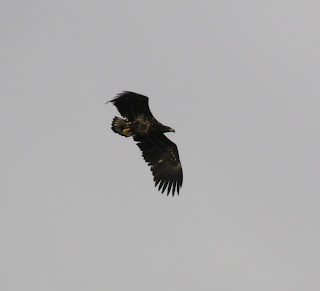 One real sign of spring was a couple of Oystercatchers freshly in. I was lucky enough to find Oslo's first of the year just 5 days ago so they waste no time pushing north.
Lagt inn av rixy kl. 21:17