Today offered a number of surprises. I was in a bit of despair as to where to go. A sighting of a Stonechat in Østfold yesterday had me hoping that there might be a chance of something turning up, but I had no intention of driving all that way and conditions on the coast in Østfold must be much more spring like than around Oslo. In the end I thought that a trip along the Glomma river in Akershus would give me the best chance of finding something and it would also let me check out the conditions on the Taiga Bean Goose fields so I could get an idea on when they might be suitable for the geese.

My first stop was at Bingen Lenser and here the mighty Glomma river was frozen over except for a couple of open patches which held a few Mute and Whooper Swans plus single Canada Goose and Goldeneye so not exactly promising conditions. The steep slopes down to the river which normally become snow free early in the year were also covered in snow so there were no passerines to find here which I had hoped for.

Moving up to the Taiga Bean fields they were covered in so much snow that people were skiing on them and there was no stubble sticking out of the deep snow. A Starling eating snow was a surprise though.

Moving to the church at Udenes I had a vague hope of maybe finding a Smew on the river but with ice on the edges and snow of the fields I had no expectation of finding geese. When I got out of the car at 0945 I heard Whooper Swans which was expected as small numbers winter along the river but the sound of geese was most unexpected. I set up the scope and unbelievably there were 11 Beans on the ice edge. After a couple of minutes, I suddenly counted 13 and thought that I must just have missed two but considering subsequent events they may well have arrived there and then. At 0958 the geese took flight and to be honest I expected them to head south and back to Denmark (as a tagged bird did a few years ago) but the reason was actually that a young White-tailed Eagle was hunting them! The eagle left empty talloned but split the birds into groups of 8 and 5. When the birds returned after a few minutes there were now 15 birds with another two having somehow materialised. Then at 1009 a single bird flew in calling and now I was sure that I was witnessing birds arriving. At about 1020 I did something silly and drove a few miles to check another bit of the river. When I returned a half hour later there were now 76 Beans plus a Pink-footed on the river – so I had managed to miss the big arrival… Then at 1135 three geese flew in calling from the south and were a pair of Beans (one ringed) and a Greylag.

I stayed until 1250 but no new birds arrived. Judging by a lack of droppings on the ice I believe that all birds probably arrived today and it is interesting how they arrived in different size groups. There were only 5 birds with neck collars. The only ones I read with certainty were the pair 3Y and 7V. I had not seen these birds here last autumn so I was surprised to see them with 4 young. There were hardly any young amongst the birds that passed through here in the autumn so maybe more families chose another migration route?

The three other collared birds were all paired with uncollared birds and without young but I was unable to read their collars with certainty as the 1km range was just a bit too far for my scope.

I have been following the weather forecast at the Danish staging grounds and it has been so cold there that I was quite sure the birds would not have moved on. In the last two days temperature have risen above zero both day and night but the winds were not southerly so I was still expecting them not to move on – but I was obviously wrong. I’m sure they are regretting their decision though and would not be surprised if they move away to the south. It will be a least a week before the snow melts on the fields and there seemed very little vegetation for them to access by upending in the river so they will not be able to put on weight very quickly (may even lose it).

In addition the 78 Bean Geese and single Pink-foot there was also a mixed pair of Canada x Greylag Goose and the single Greylag which arrived with the last two Beans.

The White-tailed Eagle was the only raptor and single overflying Skylark and Parrot Crossbill were pretty much the only passerines in the air but I could hear drumming Black and Great Spotted Woodpeckers and yaffling Green Woodpecker though which was a very promising development. 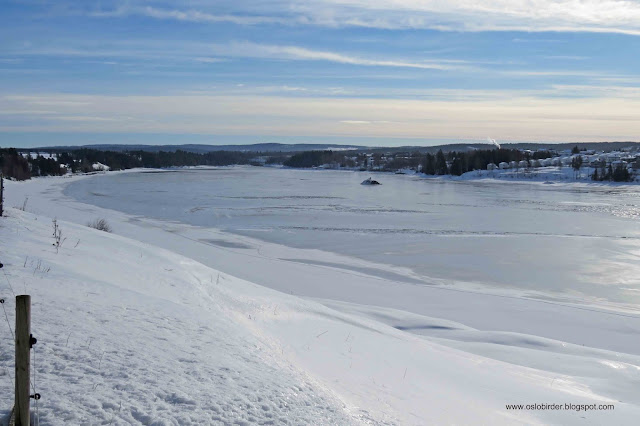 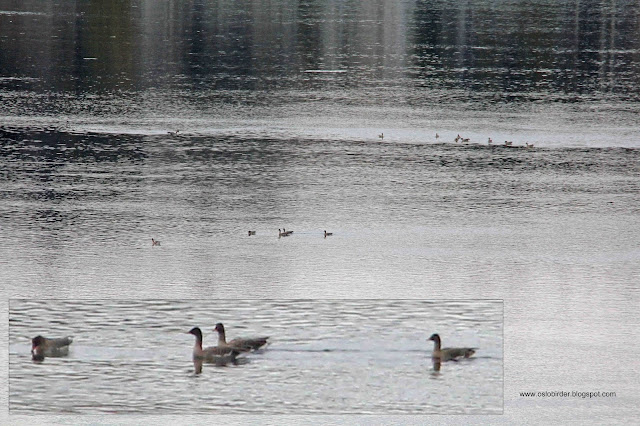