I'm fully fledged now and leaving my home territory with increasing frequency. Today was another 4am alarm call and an hours drive to Østfold. I was in situ at seawatching location Brentetangen at 0520 and ready for a bird bonanza. The lack of other birders was probably a sign that the weather conditions were not ideal but never mind - I am putting in the effort so eventually I will be rewarded.
I persisted for 3 hours and although there was no big rarity or large numbers there was enough variation to keep me interested. Totals (all heading north) were Red-throated Diver 20, Black-throated Diver 5, Whimbrel 61, Oystercather 70 Long-tailed Duck 4, Scaup 14, Tufted Duck 18, Velvet Scoter 13, Common Scoter 2, Goldeneye 7, Kittiwake 1, Arctic Tern 2, Common Tern 16, Osprey 1 and Shelduck 7. There was also a near constant passage of Tree Pipits overhead. Strangest sighting of the day was a pair of Bar-headed Geese that first flew south and then 10 minutes later came back north in the company of 13 Cormorants. I intend to have a few more trips here and hopefully I will be there in optimal conditions which are apparantly south westerly winds in the north sea which push birds up into the Oslo fjord.

Next stop was Kurefjorden where there were more waders to see than my last visit although still no large numbers: Whimbrel 5, Curlew 2, Golden Plover 9, Lapwing 14, Redshank 4, Greenshank 4, Ringed Plover 5 and a single male Ruff which was in full summer pumage. A female Marsh Harrier buzzed the tower putting all the waders up and I heard a Wryneck singing and a (Lesser) Redpoll flew over singing. There were 3 broods of Greylag Geese already on the water which seems amazingly early given that the Lesser White-fronted Geese have not even arrived in Norway. I checked out the many fields in the area for Dotterel but to no avail.

Last stop was Øra on the outskirts of Fredrikstad. This was my first visit here and I was surprised to find it is located on the edge of the local rubbish tip. This probably explains why it has had a good run of gulls in the past but was quite challenging on the nose. The area is surrounded by shallow tidal waters and large reedbeds. From the reeds I heard at least 2 Bearded Tits calling and over them were 2 Marsh Harriers. There were a few waders: 13 Whimbrel, 7 Greenshank, 1 Wood Sandpiper and a Dunlin.
So I put in lots of effort but was perhaps lacking in luck as when I got home I founds out that a Subalpine Warbler had been found only 20km from where I had been. 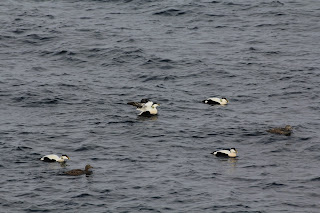 Email ThisBlogThis!Share to TwitterShare to FacebookShare to Pinterest
Etiketter: Eider