A family walk was on the agenda for today and we agreed on a walk in the forest north of Maridalen heading for Mellomkollen where we would be able to eat our lunch looking out over the forest with a view to Oslo. Coincidentally this is also an area of old forest with the chance of some good birds.
On the drive up we passed Maridalsvannet and could see that the ice is now fast disappearing with perhaps only 10% remaining. We noted 3 Whooper Swans (2 adults and a 1st summer) which I assume are the same birds from over a week ago and also last years breeding birds. Just as when they were breeding they seem to have a habit of going missing for days if not weeks on end which seems a pretty difficuly feat for such obvious birds on a relatively well watched site. We also had a flock of 80 Geese fly north over the car. I could not identify them although they are most likely Pink Footed although they did seem a touch large - it is not easy identifying birds whilst driving! I was driving at 60km/h and the geese were easily flying faster.
The first bird we saw as we headed off from the car was a Hazel Grouse which we flushed from by the path but unfortunately could not relocate and we also heard another singing later in the day. In some large puddles by the track were a number of frogs croaking and getting amorous although as yet no spawn had been laid. There were not many birds in the forest with Robin being the commonest followed by Chaffinch and then Coal Tit. There were a few Willow Warblers back on territory aswell as Dunnocks and a couple of Goldcrests. We found a pair of Willow Tits excavating their nest hole in a rotten tree - perhaps the easiest way to separate them from Marsh Tits which use existing holes. The pair were removing a lot of rotten wood which they deposited a few metres from the tree before quickly returning for more. Highlight of the walk though was my first Wren of the year. I had 2 birds singing and another sight record. They were quite a way into the forest in an area which I would have considered less than optimal although I have to assume that this was prime habitat as with so few birds around this year the remaining ones must be choosing the best territories available. A singing Tree Pipit was also a first for the year.
We had 5 species of butterly: Brimstone, Peacock, Comma, Green Hairstreak and Camberwell Beauty. We watched a pair of the later in a courtship flight which saw them flying to tree top height together before plummeting down and then repeating.
We also came across the hair of a large animal (probably an elk) that was spread over a large area suggesting that it had been killed and eaten but there were no bones to be found.
No bird or butterfly pictures but I did manage these flowers which in Norwegian are called blåweis. 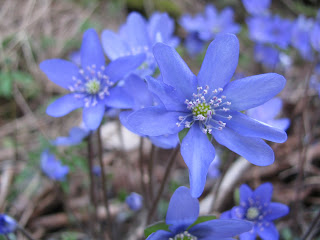 Interestingly we counted anything between 6 and 10 petals on a flower. In the picture you can see the flower in the foreground has 8 petals whereas the one behind to the left has only 6. i had assumed that number of petals was a constant for a single species of flower but seemingly not.
Lagt inn av rixy kl. 19:12